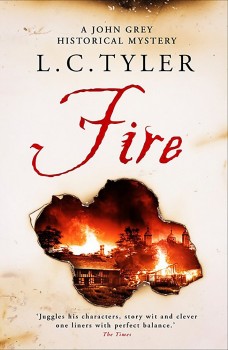 In 1666 England is at war with Spain and France. A massive blaze destroys much of London. Lawyer John Grey is tasked with discovering whether a Frenchman is to blame and is plunged into danger that threatens both himself and the nation.

The latest story of brilliant young lawyer and part-time spy John Grey once again provides readers with a superb insight into the wit and elegance, sin, debauchery, political and religious plotting and sheer casual brutality of the volatile years of the Restoration.

The year is 1666. England is at war with Catholic Spain and France. When a drunken baker’s oven starts a massive blaze that destroys the city, angry Londoners look for someone – preferable a foreigner and a Catholic – to blame for the loss of their homes and livelihoods.

Grey, who attempted to fight the blaze while most of London fled, had stumbled over a body, no fire victim, but stabbed and with someone hunched over it. When a Frenchman is arrested and admits to having set the blaze together with an accomplice, whom he subsequently killed, it becomes a major problem for a Court trying to dampen post-conflagration hysteria in a population where memories are still fresh of the bitter civil and religious war.

The dissolute and uncertain Charles II and his strongly pro-Catholic brother James are widely suspected of trying to overturn the establishment of Cromwell’s Commonwealth and the reforms of the Restoration, while religiously divided lords and court factions battle to advance their own ambitions and exert influence on a king who would rather be gambling, horse-racing, drinking or whoring.

Grey, now established as a successful lawyer, is tasked by his part-time spymaster, Secretary of State, Lord Arlington, to prove the man is lying. Though Grey agrees with the vain, pompous and frugal Arlington that the Frenchman is hardly sane and merely repeating details he has been trained to say by far more devious plotters, uncovering the source proves more difficult.

As he and the woman he loves, but is afraid may be his half-sister, the playwright Lady Aminta Pole, follow the clues amid the smoking ruins, it quickly becomes clear there are powerful forces at work and that they themselves are in deadly danger.

Once again, Tyler uses a quite short, but deviously plotted story to exhibit his entertaining and evocative storytelling. This Restoration romp is delivered with real panache and verbal artistry, history in all its dark and deadly reality, lit throughout by a veritable firework show of witty one-liners all wrapped in an enthralling mystery.

The series has gained strength throughout and Tyler juggles his characters, story and wit with perfect balance. Having touched on the Civil War and the Commonwealth, he now offers a tale of double-crossing and double agents during one of the most tumultuous period in English history.

Grey and Aminta Pole are easy to like, fascinating characters, both with a history as convoluted as you’d expect and it is only real life – and scandal – which keeps getting in the way of their union. And you cannot help feeling some sympathy for Will, Grey’s clerk and servant, who seems to have more sense than almost anybody else in their world, and who spends much of his time as a go-between when he is not trying to temper Grey’s ‘dog with a bone’ attitude to his investigation. He often appears as the one strand of sense and balance in what is otherwise a manic situation.

The mystery is such a good one, featuring the enormous religious differences between the king’s advisers – as well of plenty of naked personal ambition – and the setting is so realistically evoked. This charming and witty tale is one for the shelves of both historical fans or those who just like a damn good mystery read.