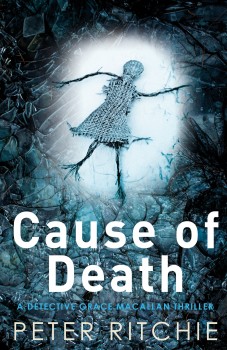 DCI Grace Macallan and the newly formed Lothian and Borders Major Crime Team must track down whoever is brutally attacking and now killing prostitutes.

DCI Grace Macallan has transferred from the Northern Ireland police service to the newly formed Major Crime Team in Scotland’s Lothian and Borders. The move was made under something of a cloud, but there’s nothing new in that. It sometimes feels like there isn’t a happy, decent copper with a stable marriage and no drink problem in the entire country. Maybe the entire world, and Grace is no exception. Her own personal demons make themselves felt mostly at night, when she still dreams of the operation that went wrong and left her with a dead informant, a colleague behind bars and a name that everyone else in the service is happy to spit on.

She’s thrown it at the deep end with the team’s first case, a series of brutal attacks on prostitutes that are escalating in violence and soon attract the attention of the press. Grace’s boss, Superintendent O’Connor, is a career officer with his eye ever on the next promotion, so he wants a quick, clean resolution to the case.

As Grace is a newbie to the area, she’s paired up DS Mick Harkins, the man for whom the words ‘grizzled veteran’ could have been coined. Instead of living down to his reputation and giving her a hard time, Harkins takes Grace under his wing and they quickly build a good working relationship, but pressure soon mounts and stretches the team to breaking point, leaving Grace struggling to tell friends from enemies as her old insecurities threaten to overwhelm her.

Peter Ritchie was previously the Head of the Organised Crime Unit in the National Criminal Intelligence Service and the UK Liaison Officer to Europol. His real-life experience brings the sharp smell of authenticity to Cause of Death, his debut novel. Harkins is a convincing portrait of a hardened, old-style thief-taker busily counting down the days to retirement, not wanting anyone to know that he’s going to be completely adrift when he gives up the job he now professes to want to see the back of. O’Connor is equally well-drawn as a man who is already planning to scale the next section of the greasy pole to a job amongst the top brass.

It’s when we get to Grace Macallan that my admiration starts to waver and that’s mainly because for me, Ritchie comes over as trying just a wee bit too hard with her. Everyone falls under Macallan’s spell: the crotchety Harkins, the somewhat slimy O’Connor and even a feisty female reporter, who turns up complete with wine and the ability to lure Grace into bed, which given the fact that our heroine is also sleeping with her boss, makes interpersonal relationship a tad complicated! If Ritchie dials back his own love for his character, and practices the well-worn advice to writers of show not tell, then he’ll be doing his character a great service.
The advice is well-worn for a good reason, as is the second most frequently delivered bit of advice to new writers, which is get a good grip of whose point of view you are writing from. Ritchie’s point of view leaps around the page like the hyped-up rabbit, sometimes even changing mid-paragraph. On one memorable occasion, I was so confused by whose point of view had been adopted that I thought a fox was driving a car down the motorway. The constant head-hopping is both exhausting and distracting and there were times when I struggled to stay on board.
Despite that, I’m glad I did stick with Cause of Death. What Ritchie can do is tell a damn good story. His villains are especially convincing, his plotting is strong and in the closing stages, I definitely didn’t want to put the book down until I knew how it all worked out. Even the inevitable talky-talk reveals were pulled off with some aplomb. If Ritchie can get a grip on his writing techniques, there’s a lot of promise here, and I do hope we get to see more of Macallan and Harkins in action together.