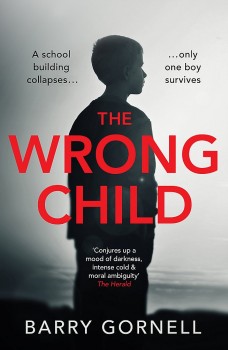 Twenty-one of 22 children in an isolated village die in a disaster. Dog Evans is the only survivor. Abandoned by his parents and shunned by those left behind for whom he is a daily reminder of loss, the situation inevitably builds toward violence.

This hypnotic and dark story will both disgust and enchant you. For the reader who wants to be forced to use their mind to contemplate the effect of grief, loss and hatred on a small isolated community it is a must read – and one, if your stomach is strong enough, you will be unable to put down.

Former screenwriter, firefighter and truck driver Barry Gornell lives with his family on the west coast of Scotland, and sets his harsh and unrelenting story in one of the many isolated communities in that area.

Twenty-one of the village’s 22 primary school children and their teacher have died in a disaster. The only survivor is the unlovely Dog Evans, mentally damaged, but physically advanced. He’s abandoned by his guilt-crippled parents to a feral, marginal life, and shunned by those left behind for whom he is a daily reminder of their loss. Dog is the symbol of everything the village has lost and the reason why every day hurts. As grief turns to rage, the villagers’ insatiable desire for catharsis and sacrifice becomes unstoppable and the situation inevitably builds toward violence.

Deborah Cutter, rejected by her policeman husband John, numbs her pain with alcohol and sex. The local postman believes the Evans’ house contains valuable secrets. The parish priest comes to realise his faith is an embarrassing irrelevance.

The simple plot is hard to describe, not so much a crime story, more a concentration on the harsh and dark side of human nature and its reaction to such a tragedy. It is truly a mesmerising, heart-breaking examination of small town life – with a small, but remarkable note of hope within the darkness.

Gornell’s structure, showing the innocence of some of the dead children on their way to the last day of their lives at school, complete with their partially burnt photos, is eerie and unsettling. Even as they play in the snow, the shadow of Dog’s unrelenting darkness hangs over everything.

Alternate chapters focus on the seventh anniversary of the tragedy and what is to follow as the adult characters deal with their grief and guilt in differing ways.

In the aftermath of an act of horrendous violence which features the complicity of the whole village, even Dog’s parents, driven away by the sheer guilt of their strange son’s survival return to face the morality of their actions.

Gornell carefully rations snippets of information and glances into the past with its connection to the present as he begins to build this dark and painful story.

It’s quite shockingly brilliant, a piece of noir to end all noir – and a book every thinking reader should have on their shelves as a reminder of how the effects of brooding on loss and grief can so easily turn to mass hysteria and something far more evil.