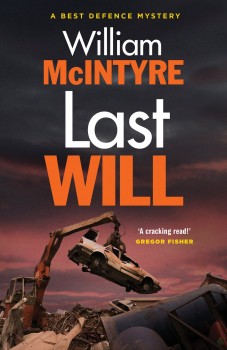 Robbie Munro is fighting a custody battle over his daughter Tina, but finds himself under severe time pressure seeking a defence for a man accused of murder.

For those following the saga of Scots lawyer Robbie Munro (the Best Defence mysteries) it will avoid confusion if I say at the outset that this predates the two books already reviewed here, Present Tense and Good News, Bad News. In Last Will, Robbie is fighting for custody of his four-year-old daughter Tina.

Unfortunately, Robbie’s clients tend to the less reputable end of the line needing representation, and their demands on his time make it difficult for him to show that he has the ability and commitment to be a proper father. Local villain Jake Turpie is pressing: he wants to get his man Deek Pudney off a charge of murder, and attempts to muddy the evidence at a farm, the scene of two deaths, which does little to help the defence and does Robbie’s reputation with the Procurator Fiscal no good at all.

The visit does, however, produce some benefit: Robbie finds and rescues Molly, another wee girl, who one of the victims, Daisy, was seeking to adopt. Molly is taken into charge by Vikki, a social worker who also has the responsibility of reporting on Robbie for the custody hearing. Robbie takes a fancy to Vikki but she is not entirely persuaded of Robbie’s good intentions.

Robbie’s efforts to uncover the real story behind the murders take a long time to bear fruit, but eventually a tale of drug dealing, high fashion and an inheritance is revealed.  Robbie’s intentions to demonstrate his abilities as a father are frustrated by his time at work, but luckily he has the services of his father, ex-footballer brother Malky, and long-suffering secretary Grace-Mary to help him out.

What I imagine must be the re-issue of the first book in the series presumably reflects a public warming to the protagonist, a morally somewhat equivocal character and no great genius, which enables the reader to feel comfortably superior. The humorous asides ensure a light-hearted feel throughout, even as we sympathise with the rather disapproving looks Robbie gets from his father and Grace-Mary. His attempts to manage a bright four-year-old are as inept as you would imagine, although there is no doubting his desperation to keep his daughter close.

As for the crime story, Robbie plays his usual mixed role of lawyer and private eye. In keeping with his other adventures, the state representatives are more interested in making a case against the most obvious culprit than seeking the truth, and some may feel that their determination to overlook the most egregious weaknesses in evidence is a little overdone. The whole does, however, make an entertaining combination; you occasionally even get a glance at the law, distinctly different from that in England.