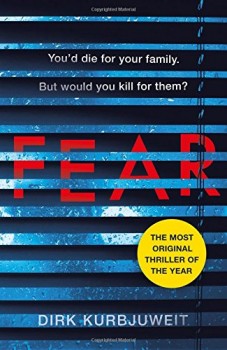 The shocking allegations of a creepy neighbour are profoundly unsettling to Randolf and his wife Rebecca, and when the state cannot help the options are limited.

Architect Randolf Tiefenstaler lives with his wife Rebecca and two small children in a first-floor Berlin flat. The semi-basement below is rented by Dieter Tiberius, a recluse, who accuses Randolf and Rebecca of sexually assaulting their son and daughter. The culmination of the family’s struggle to overcome the threat is revealed at the beginning of the book – the imprisonment of Randolf’s father Hermann for the manslaughter of Tiberius.

Tiberius’ accusations initially come by way of notes left for Rebecca, combining innocuous phrases heard through his ceiling with perverted projections from his imagination; subsequently he contacts the police and social services to report his assertions. These bodies take no action against the Tiefenstalers, but seem equally indifferent when pressed to restrain Tiberius. Randolf’s appeals to Tiberius’ landlord get nowhere, and a lawyer advises that there is no effective legal remedy.

The impact of Tiberius’ claims on Randolf and his family is examined in detail by Randolf, who narrates throughout. Behind the facade of an attractive family and professional success, the Tiefenstalers are having problems. Randolf has much in common with his father, much as he is reluctant to admit it. Hermann has a huge gun collection, and Randolf spent his childhood in fear from this, although Hermann has such difficulty in expressing his feelings there has never been any real threat.

Like his father, Randolf has a tendency to withdraw from family life, and has taken to dining alone in restaurants, claiming to be busy at work. Most of the time, his wife is understanding when Randolf chooses to ‘disappear’ and only occasionally cracks, with sudden and explosive fits of anger. Under the threat arising from Tiberius, the pair are shaken out of the dynamic they had fallen into. Initially, both find it difficult to reject the accusations easily, and have momentary suspicions of themselves and the other.

Before long, however, in their shared concern for the family the couple rediscover the closeness they enjoyed in the initial period of their relationship; ironically, Tiberius has pushed them back together. Randolf is a pacifist, and rebuked by his brother for being unable to act directly against Tiberius or even to pay others to do it, but Rebecca never presses him. A solution has to be found, however, and although the outcome is spelled out at the beginning, there is a twist in the tail.

Fear was originally written in German, and the translation is excellent, reading like perfect native English, while retaining a distinct flavour of German sensibilities. The story of a family entirely normal to outsiders but with weird internal conventions is of course universal but well explored here, and the examination of how parents and children interact is perceptive enough to get the reader thinking about their own experiences. This is a book with a lot to offer.