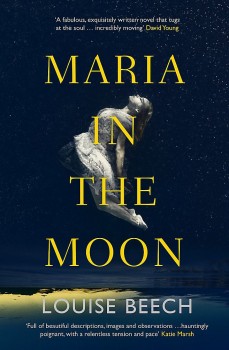 Maria in the Moon

Catherine has a great memory, but she cannot remember what happened when she was nine years old.  She feels desperate to unlock her past to understand herself and those around her.

Catherine-Maria Hope is nearly 31, suffering from flaring eczema and low confidence. Her life is not a barrel of laughs, and seemingly it has never been though rays of sunshine and lovely moments have appeared from time to time. Some say that she lacks direction and has no ambition, as she works night shifts at a care home following her only wish to help people.

She’s got an incredible memory yet she cannot remember everything, especially her ninth year, and why people stopped calling her Maria. She treasures memories of her mum who died in childbirth, and of her loving dad who had a heart attack when she was eight. She hates recollections of her own behaviour throughout her teenage years that continues each time she sees her mother – mother who was not a ‘mum’ but her dad’s second wife.

Currently she is living in a run-down flat above a smelly fast food shop she shares with a sparkly vivacious friend Fern, and is painfully missing her own home, destroyed in the recent floods. As the house is slowly drying and the builders start the renovation work, she feels compelled to volunteer at the Flood Crisis, having gained experience at the Crisis Care helpline before.

The previous volunteering stint also brought a relationship that Catherine was unable to handle, and although there was nothing wrong with her boyfriend, she finished it because ‘It’s not love unless it hurts.’ It’s a deeply seated conviction that must have come from somewhere and has left her feeling incredibly guilty and unworthy of positive feelings.

Catherine is familiar with the drill at helplines and had to choose a name at the Flood Crisis one to remain anonymous and detached from callers. As Katrina (akin to emotional hurricane) she hoped to find some peace and untangle a web of scary thoughts and recurring nightmares, featuring a bushy man. So she changes from Catherine with a semi-built home and a dead-end job into Katrina, the woman people need. She forces herself to remember, to investigate the hidden rooms of her past, to study a photograph from her childhood, with smiling people surrounding her, and featuring a rabbit. Several calls from Sid, a lonely old man who has suffered a stroke, trigger forgotten memories.

Maria in the Moon was published to coincide with the tenth anniversary of the 2007 UK summer floods when author Louise Beech lost everything. Her writing is raw, beautiful and alive with emotions, and also full of fun. Horrendous events from childhood come to the surface, and the poetry of mundane life shines in every sentence. The finely balanced feelings of despair, hope, optimism and community spirit set up a sensitive rich background for the analysis of how to manage forgiveness and ways of coping with a painful overwhelming past.

This is not a typical crime fiction story as it’s quite possible to work out what terrible trauma has shaped Catherine’s life, and how it has affected those around her, but nevertheless, the personal journey of the too-prickly, angry, not-always-likeable but genuine character is worth following.