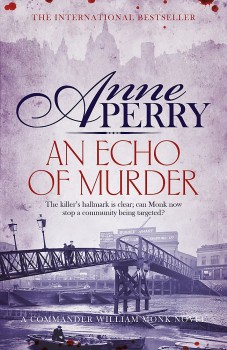 An Echo of Murder

A Hungarian man living and working near the Thames, is found brutally murdered. Commander Monk is on the trail of the culprit.

Commander Monk, head of the Thames river police is called to a horrific murder in a warehouse by the side of the river. The victim is a member of the community of Hungarians living in the area. The murder is closely followed by other murders, each of a Hungarian citizen, with each murder scene having the same weird characteristics. Monk needs to solve these murders before any more happen and before even more people get pulled under the net of suspicion.

Meanwhile Monk’s adopted son, Scuff, continues to develop his medical skills alongside the local doctor Crow. As their workload increases Scuff finds a new doctor, Dr Fitzherbert, who is called on to help. It appears that Fitz served alongside Hester, Monk’s wife, in the Crimea, both having been involved in horrendous scenes of battle, with Fitz still suffering from what would now be called post-traumatic stress.

As always Anne Perry’s writing is very comfortable to read with a certain feel of at-homeness descending. A past reader of these novels is cleverly brought up to date with Monk’s family members and his faithful work colleague. Descriptions of Victorian London abound whether of the riverside streets and warehouses, or of Monk’s home with its warm kitchen, hasty breakfasts and homely suppers.

There is a great deal of detail in the book about the doctor’s cases. Two cases in particular are described in real detail. One involves the amputation of an arm. This is the case in which the new doctor Fitz is first called on to help due to his ability to speak Hungarian and the need to translate for the patient. The second involves a graphic description of the treatment of someone who has tetanus. Once again the Victorian treatment is explained in minute detail. Although the medical history is fascinating in itself, it sometimes feels that the story is put on hold whilst all this detail is explained.

It is interesting that the more minor characters are the main focus in this book whilst Monk gets on with his job, struggling to make any progress in the criminal investigation. The focus is very much on the medical side with additional details of nursing during the Crimean war – whether in a field hospital or collecting bodies on the battlefield. An interesting line of thought explores the guilt experienced by those who do everything humanely possible to help the injured and yet find that it is not enough to save the patient. As always the story ends with a court case which provides a good forum for some logical argument.

Overall the book is about stereotypes and prejudices which are explored within the context of Victorian London. The horrific crimes and the medical situations are counteracted by an atmosphere based on values of kindness and respect. The whole makes for a well-planned story with on-going familiarity for those who are already fans of the Monk novels. For those new to the series, everything is explained and thus easy to take on board, with a mystery that lasts right until the final pages.