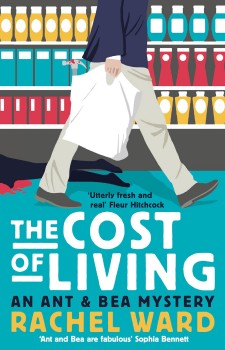 The Cost of Living

When a colleague is attacked on her way home, Bea, who works in the same supermarket, takes an interest in the case.

Bea Jordan works on the checkout in her local supermarket, Costsave. She enjoys her job and the customers like her. Bea lives at home with her agoraphobic mother, whose life effectively stopped when her husband died and since then, she’s shut herself away, living life by a strict routine that dictates that they eat the same thing on a given day every week. Variations from routine upset and frighten her, but by contrast, Bea wants to branch out and occasionally try something different, even if it’s only an unusual fruit that she’s not eaten before.

Bea’s a sharp observer, and learns a lot just from talking to her customers and watching them in the store. She has concerns about a harassed young mother, married to a possibly abusive husband with a roving eye, and worries about elderly customers who can’t afford all their shopping, but Bea is also a pragmatist who knows she can’t solve everyone’s problems for them. But when one of the Costsave employees is attacked on her way home from work, Bea can’t help doing some investigating of her own.

The Cost of Living is YA author Rachel Ward’s first foray into adult fiction. It’s very much a slice of life book at the cosy end of the genre, and there’s nothing wrong with that. I often find difficulty suspending disbelief for amateur sleuths, but didn’t suffer from that problem here. Bea Jordan is a likeable main character and I enjoyed seeing a familiar environment – a supermarket – through the eyes of an insider. There’s Dot on the next till, a cheerful 50-something with a kind word for everyone; Gavin – don’t call me Gav at work – the harassed manager who talks a lot about employees being part of the Costsave family and actually seems to mean what he says; there’s also hapless Ant, a teenager with acne and an attitude problem who can’t even stack shelves without mucking up.

Bea and Ant make an unlikely pairing, but watching the slow, believable development of their tentative friendship was one of the things I liked most about the book. It might be something of a reviewing cliché, but it’s true that Ward writes her characters as real people. None of them are anything out of the ordinary, and that’s one of the book’s great strengths. These are people I could easily relate to, with very real hopes and fears, and Ward brings them alive in a story that’s down-to-earth and at times quite chilling as the violence escalates and the people of Kingsleigh become afraid to walk home at night.

There’s also plenty of everyday humour, and I had a juvenile snigger at the printing mix-up over the name on the Costsave promotional teeshirts for a fund-raising in-store cycle challenge. Bea and Ant are a delightful crime-solving duo and I’ll very happily join them again for another clean-up in a Costsave aisle.