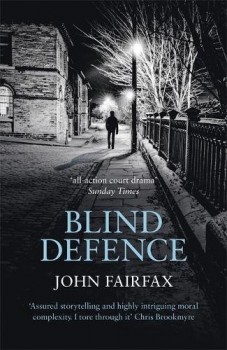 Barrister William Benson defends a man accused of the murder of his partner and finds the case extends beyond simple domestic strife to organised criminal activity.

William Benson was introduced in Summary Justice, a man who served more than 11 years for a murder he claims he did not commit, but forced to admit culpability to earn redemption. While inside he studied for the bar, and with the help of funding from an anonymous benefactor has qualified as a barrister. He operates from an old fish-shop assisted by his clerk Archie and typist Molly.

His latest case is once again brought to him by solicitor Tess de Vere, who has been a supporter of Benson since his own trial. Diane Heybridge was found hanged in a London bedsit with a blood orange in her mouth. Standing accused is Brent Stainsby, former partner of the victim, whose DNA is found in several places at the scene of crime.

The prosecution case is simple: that Stainsby became irate when Diane terminated their long-term relationship in Dover and moved to London to make herself a new life. However, Stainsby maintains that he has been framed as revenge for an alleged assault on a police officer some years before which the police were unable to prove in court. It becomes evident that Diane provided Stainsby’s alibi in that case, and that far from being a naive victim, Diane had her own agenda.

The full truth about Stainsby and his criminal activities is not revealed until the final pages, but Benson sees early in the case that Stainsby’s best defence is to reveal a fuller picture of Diane, someone who was fully capable of taking her own route to gain justice. From very minor hints in the documents available to him, Benson masterfully draws information from the witnesses to provide a challenge to what initially appeared to be a slam-dunk prosecution case.

Meanwhile, Tess is persuaded by her friend Sally to challenge Benson’s reluctance to revisit his own murder case. The women discover that Benson had a history with the man he supposedly murdered, Harbinson. They also follow up another clue: a bracelet found by Harbinson’s body, which in time reveals some unexpected connections.

Benson continues to suffer from public notoriety, although his skill in court is helping to gain him sympathy. Behind the scenes, however, Secretary of State for Justice Merrington is disgusted with his son’s support for Benson and has an investigator gathering information which he is confident will end Benson’s career once and for all.

John Fairfax always has plenty going on, with the various plot lines interweaving to sustain the excitement. The moral dilemma implicit in Stainsby’s defence is well brought out. Occasional flashbacks to Benson’s time in HMP Codrington hint at the compromises he was forced to make which still come back to haunt him. There’s great courtroom action and plenty still to come out about Benson’s history – will he and Tess ever get together?