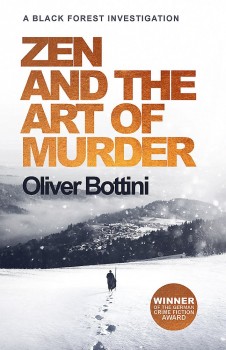 Zen and the Art of Murder

Half-French, half-German Chief Inspector Louise Boni, divorced, her brother dead, and in her 40s, is a loose cannon in the Freiburg Serious Crimes section. Since shooting dead the abductor of a young girl, she has become a borderline alcoholic, trying to sink her traumas in a sea of alcohol, but unable to shake off the ghosts of the dead and hallucinations around those still alive.

An injured Japanese monk, clad in inappropriate clothes and sandals for the winter weather, raises a minor panic as he walks through a small Black Forest village, raising the spectacle of an influx of foreign refugees.

A long-serving local policeman gives the man food, but fails to communicate with him and decides to stay with the wanderer. Boni is called and after spending the night with the fearful and traumatised man, senses something is seriously wrong and that the monk may be in deadly danger. On her own initiative she sets up a team to follow and shield him, using the local policeman, another young officer and a colleague from the Serious Crimes squad.

Her boss refuses her request for more help and tragedy follows when the young policeman is shot dead, the local man critically injured, and the monk disappears. Unconvinced by Boni’s suspicions, convinced that the monk is the main suspect and tired of Boni’s increasingly erratic behaviour, her bosses force her off sick. Boni continues her inquiries despite this, travelling back and forth across the Franco-German border. She is led to an isolated Buddhist monastery and a charitable organisation that places orphans from the Far East with adoptive families – and finds her own life in danger.

Amid the drama of the investigation, much of the story is a psychological study of its main character, who seems on the edge of a nervous breakdown, and reader enjoyment depends on how much you can sympathise with her plight. Boni is gradually drawn towards the Buddhist philosophy in her search for identity and to straighten out the wreckage of her life, with its constant need for stimulus, whether alcoholic or sexual.

Although Zen and the Art of Murder is a little formulaic – maverick cop dealing with personal demons and fighting bureaucrats at work – it is also an atmospheric, original story that will keep you hooked to the final heart-rending revelations.

Translation can make or break any book in a foreign language. Jamie Bulloch has done a first-class job with this English debut by German author Oliver Bottini, keeping the pace high and avoiding the ever-present threat of over simplistic translations of idioms or common phrases.

As for this offbeat thriller set on the borders of France and Germany Bottini spins a good, if slightly hackneyed story, offering plenty of tension without too much brutality, local colour without sentimentality, and explores the potential to examine the concealed traumas of German society to offer an intelligent read with some intellectual depth.

There is a bonus in the shape of a short story which tells of the killing which so traumatised Boni – and it might be a good idea to read that first, to set the scene for the character she has become.