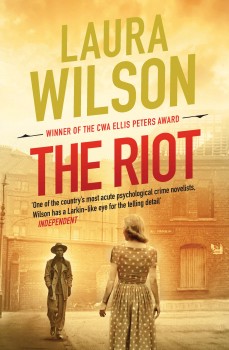 DI Ted Stratton is posted to Notting Hill in 1958 where racial tension and financial manipulation need to be untangled to solve several murders.

DI Ted Stratton is newly posted to Notting Hill in August 1958, an area with many new immigrants, including those from the Caribbean, and where friction with old-established residents is growing. When a white rent collector is murdered, Stratton interviews the numerous other multi-occupants of the large Victorian house, but has made little headway when a fatal stabbing of a black man by a gang of white youths adds to his workload.

Tensions are rising and this culminates in the firebombing of a party organised to promote cross-cultural understanding, at which a titled woman is murdered, followed by a riot. Stratton barely sleeps as he methodically interviews the people involved to unravel the connections between the deaths and identify those responsible.

Re-creation of the past is not easy, and Laura Wilson’s fiction is impressive: such aspects as the poor environmental fabric, formality in relationships and respect for rank are all carefully marshalled to give a convincing picture of a society very different to that of today.

Central to this picture is Stratton himself, subject to the prejudices of any man of his time and class, if perhaps a little more clear-thinking and civilised than most. What most characterises him, however, is his sheer tenacity - his determination to interview witnesses practically round the clock to get to the bottom of things - which brings a touch of what feels like real life to a police procedural of the time.

As to what he discovers in his investigations, THE RIOT interweaves two plot lines. The racial tension is well described; in his witness statements we hear plenty about the different perspectives of the black and white communities. From the whites there are the familiar complaints about the lifestyle of the immigrants, made sharper by the close proximity imposed by inadequate housing, and fermented by the BNP of the day. For the single black immigrants, Britain proved to be a great disappointment, with few of the opportunities they had hoped for and a great deal of prejudice to face.

The other story element is a financial one. Wilson tells us that at the time it was possible for anyone to set up a building society, providing a great opportunity for profit if people with money could be persuaded to invest. In this book one of the central characters exploits this possibility, and with the help of a Polish Jewish immigrant circulates the money to create a property empire built on sand. This is all too believable; fortunes were made in London property dealings in the 1950s and 1960s; it is only the failure to prosper that is at all surprising.

Wilson’s command of the period and realistic characters have no doubt been behind the popularity of the four previous Stratton books, and THE RIOT maintains a high level of quality.