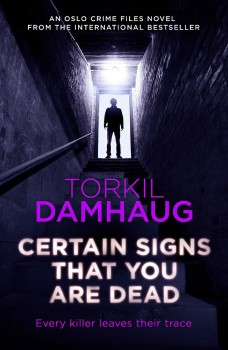 Certain Signs That You Are Dead

A badly injured patient vanishes at Akershus University Hospital. The Iranian porter Arash is blamed as he later finds the body in the basement. But as the retired pathologist Jenny Plåterud gets involved, things get messier and more complicated.

Jenny Plåterud, an Australian in Norway, has left her husband Ivar and an adult son Trym, addicted to gambling, on the farm where they had lived together, and moved away to start a new life with a surgeon, Zoran. She has retired as a forensic pathologist and now works on a research project into infertility, with Lydia, a Russian scientist. However, her relatively quiet existence is thrown back into the realms of crime scenes and an uneasy relationship with the police when she’s called to examine a body of a patient who’s been found with their throat cut in a box-room in the basement at Akershus University Hospital.

The circumstances surrounding the murder are very unusual. The man was badly beaten but still conscious when admitted to hospital. He is terrified while trying to talk to the porter Arash, a political refugee from Iran, still deeply traumatised after the horrendous interrogations back in his country. As Arash goes to pick up some paperwork for the doctors, Ibro Hakanovic, originally from Bosnia, disappears on the way to the treatment room. The discovery of his bloodied body shakes the hospital’s staff. The police are quick to blame and arrest the Iranian, especially as in a matter of hours he is near the scene of another murder, this time of a young woman that he had known.

Jenny cannot keep her natural curiosity at bay and tries to trust Zoran, Arash’s friend, and her gut feelings that the Iranian porter cannot be guilty. Very soon it becomes clear that she might be more closely involved in the situation than she could ever expect. Her second son Sigurd, a 23-year-old business student who also earns a fortune thanks to a very clever network marketing, has caused Hakanovic’s injuries. He was convinced that his Swedish girlfriend Katya was having an affair with that man, and even though he starts to hate himself for being so violent, and her for being so secretive, Sigurd still follows her to Malmö to rescue her from the competing ex-Yugoslavian gangs.

Certain Signs That You Are Dead, translated by Robert Ferguson, is the fourth psychological thriller in Torkil Damhaug’s Oslo Crime Files, a series of loosely connected books that can be read as standalones. They are dark and tense, and don’t shy from very difficult themes. This one is a gripping story, though mostly uncomfortable as Sigurd’s well-structured world seems to be crumbling, Arash relives the trauma and firmly believes that his life is ruled by Rumi teachings, and Jenny suffers from her own inadequacies in the blaze of constant sun. The events seen from different perspectives add to the mystery of the plot, initially slow-going and fairly complicated yet as the events unfold everything makes sense. Be patient.

The author takes the reader on a difficult and tense psychological journey where nothing is as it seems, and the apparent peacefulness and calm of the Norwegian society hides terrifying secrets. Through the characters, some of them unlikeable, Damhaug explores issues of guilt and revenge, family and responsibility, and what it means to have an inner moral core. It’s a fine example of a chilly Nordic Noir novel set in the hot sweltering summer.