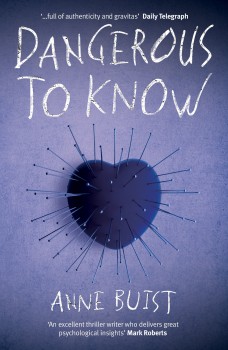 Natalie, a bipolar clinical psychiatrist who moves to the country for a quiet life, finds it anything but. She starts to counsel her new boss, Frank, whose family’s history is very far from normal. Natalie must try to stop herself from being drawn into their dangerous web.

Natalie King is bipolar and is emerging from a very deep depression – when we first meet her, she is having electro-convulsive therapy in hospital in Melbourne, following a nasty assault in her home by a man she calls the Worm, and a bout of severe depression. She rides a Ducati motorcycle, lives in a converted warehouse, and has a pet cockatoo, Bill, who also travels on the motorbike. She is an engaging character. Her friend, supervisor and therapist, Declan, strongly advises a quieter life to keep her bipolarism under control - no more wild sex, drinking or playing in her band.

Natalie decides to conform and has moved to the country - a house on stilts on the Great Ocean Road near Lorne in Victoria, to try to avoid too much excitement (though it is excitement that she craves). Bill is happy in his new home as a number of wild cockatoos hang out on the balcony and keep him company, giving a few rare moments of comedy in this rather gothic novel.

Having decided to try for a research post at the local hospital, Natalie arrives for her interview. Associate Professor Frank Moreton is handsome and charismatic, but Natalie is thrown when his wife appears. Alison and she were enemies when they trained together as hospital interns. This was Natalie’s fault, as she had spent a wild night with Alison’s then fiancé, Oliver. Frank eagerly offers Natalie the job - his research unit has very little funding, and only one other researcher, Wei.

Frank lives with his family in the large estate known as Mount Malosevic that was built by his grandfather. Alison is Frank’s second wife and is pregnant, and Natalie discovers that his first wife, Reeva, a gifted psychiatric researcher, died a few days before she was due to give birth to their first child. As Alison’s pregnancy progresses, Frank becomes more concerned about her wellbeing, and Natalie informally counsels him when they go for coffee or for a drink.

Natalie continues to treat some patients each Monday back in Melbourne, including Georgia, who is soon to be tried for the murder of her three young children. Natalie dreads the trial as she will have to face her former lover, Liam, who will be chief prosecution counsel. She takes up with Damian, a local detective, but views the relationship as ‘friends with benefits’ as she is not over Liam.

In trying to find out more about Frank, Natalie encounters another of his ex-lovers, Eliza Carson, and her menacing son, Jaspar - his paternity is one of many mysteries in this book.

Most of the book is written as though by an observer, but some short chapters are in Frank’s voice, and through this device, we learn that he is very keen to become a father. We also start to learn more about his relationships with other members of his family - his deceased father, his deceased patriarchal grandfather and his rather odd sister and mother, and also what he thinks of Natalie.

Anne Buist is chair of Women’s Mental Health at the University of Melbourne, and a perinatal psychiatrist, and is thus able to include interesting psychiatric details, which adds an extra layer to an already enjoyable book. The plot romps along, with many revelations and surprises along the way, and the ending is well drawn, with revelations right up until the final page.