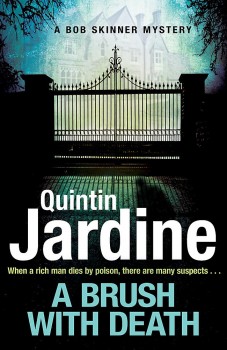 A Brush With Death

Bob Skinner is asked by the Security Service to look into the death of a multi-millionaire boxer.

Multi-millionaire boxer and Scottish idol Leo Speight is found dead at his Ayrshire mansion. The cause of death seems obvious – Speight has been poisoned. The blue lips are a bit of a clue. With a vast fortune at stake, there’s no shortage of suspects, and the Security Service have reason to believe that there might be a connection to organised crime. Cue the entrance to the stage of retired Chief Constable Bob Skinner, who’s never far away when trouble is brewing.

The case is assigned to DI Lottie Mann and her ever-present sidekick, the scruffy, irrepressible and irreverent DS Dan Provan. Neither of them seems to resent having their former boss looking over their shoulder as the investigation progresses and Skinner proves a useful ally in a complex case made more awkward for Mann and Provan by the discovery that DCI Sandra Bulloch had connections to the dead man.

The hunt for Speight’s killer takes Skinner and Mann deep into the murky world of boxing and its promotors where millions are at stake every time two fighters enter the ring, and sometimes the sport isn’t always as clean as the image its adherents try to project.

Since sending his star creation into retirement, Quintin Jardine seems to have been looking for excuses to get Skinner back into the thick of police work after his brief – and in my eyes not very successful – flirtation with the work of a private investigator. If you cut Skinner in half, you’d find the word policeman written right through him, and walking off in a huff as he didn’t approve of the newly amalgamated Police Scotland never quite seemed like his style, nor did I like the shift to stories narrated by Skinner himself. But A Brush With Death bucks that trend and goes back to the third person narration that always served the books so well. The shifting points of view provide a broader sweep to the story and a return to the ‘rabbit’s friends and relations’ vibe that I always liked so much about this sprawling police soap opera with big Bob Skinner at its heart.

There are cameo performances here from Mario Maguire and Skinner’s lawyer daughter Alexis, and some nice character development between Lottie Mann and Dan Provan during a contentious custody dispute with Mann’s former husband. I’m beginning to wonder if Jardine is setting up Lottie Mann to replace Skinner as the main character going forward and that wouldn’t be an unwelcome development in my eyes. She’s a strong character in her own right and would be a worthy successor to Skinner. But stick with the third person narration, and let’s see more of the rich and diverse cast that has given this series its longevity and staying power. I’d even like to see a return of Skinner’s former friend Andy Martin. I’ve always felt there’s unfinished business between those two.

A few books ago, I was considering a separation from Skinner, but the legal papers have now been filed in the bin and I’m back on board with a series that I’ve followed since the beginning! A Brush With Death combines a plot with as many twists and turns as a highland road with some good, solid police work and delivers an excellent addition to the series.