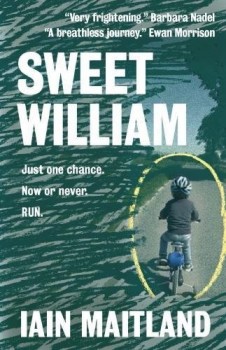 A father is desperate to be reunited with his son, and isn’t prepared to let anyone or anything stand in his way.

A man escapes from a secure mental health facility and goes on the run, desperate to be reunited with his three-year-old son who is being cared for by his wife’s sister and her husband.

Rick and Natalie Veitch have gone to a run-down cottage in Aldeburgh to stay with his parents for a traditional Halloween gathering. It’s there that the not-so-happy couple break the news that young William – known as Will – is suffering from Type 1 diabetes and needs both a carefully controlled diet and regular medication.

Natalie’s mother-in-law is unimpressed, dismissing this as some sort of new-fangled diagnosis that has no place in her world. She’s a deeply embittered woman who has never come to terms with the death of her other son some years ago and the removal of her two young granddaughters to the other side of the world by their mother. So for her, everything has to be perfect, to give her control over the world.

Will’s father knows nothing of his son’s condition, so when he succeeds in snatching his son, there’s a desperate race against time to find the boy before he lapses into a coma from which he won’t return.

Sweet William is, to say the least, a very odd book in a stylistic sense. I had no problem with the stream of consciousness that pours out of the mouth of Will’s father and lands on the page in a haphazard fashion, reflecting the disorder in the man’s own mind. Raymond John Orrey is most certainly not a pleasant character, but Iain Maitland makes it easy to empathise with him during these passages.

It’s clear early on that he was responsible for the death of his wife but has been confined to a mental institution rather than prison. His thoughts are at times darkly amusing, especially when it comes to his astute observations of others, but he’s also deeply unstable, especially as he’s not been taking his medication. These passages positive race along as he attempts to evade the police and disappear with his son to France.

My problems arose with the style of the third person past tense sections that intersperse Orrey’s first person present tense narrative. I don’t normally find the third person to be distancing, but here, Iain Maitland’s constant use of descriptors rather than character names left me feeling like I was reading some sort of fairy tale. Rick Veitch’s parents are always ‘the old man’ and ‘the old woman’. The Veitchs are ‘the young man’ and ‘the young woman’, with their names only becoming apparent in dialogue. There was doubtless an intention behind this stylistic choice, but to say it irritated the hell out of me would be an understatement, and whatever the intention was, for me it fell as flat as a pancake.

Sweet William has a very definite sense of place, and the windswept seaside town came over well, more so than its inhabitants. With a less self-conscious style, the book would have stood a chance of hooking me, as the premise of a desperate father who thinks nothing of leaving an ever-growing body count in his wake is one that could well succeed. But this was a case where style clubbed substance on the head and left it in a shallow grave. I was too distanced from any of the characters to care what happened to them, and for Orrey, there was really only one possible ending.