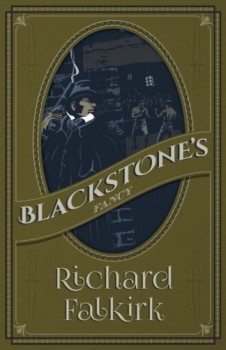 Bow Street Runner Edmund Blackstone is charged with stopping a prize fight. The only trouble is that one of the fighters is Blackstone’s own protégé, the up and coming Ebony Joe.

Bow Street Runner Edmund Blackstone has a liking for the dark, dirty world of prize-fighting, otherwise known as milling. It’s a so-called sport where two men slog it out in a ring for the entertainment of the ‘Fancy’, as enthusiasts of bare-knuckle fighting are known in Georgian England. Large sums of money change hands on the clandestine bouts, and even larger crowds gather to watch the fights, despite the best efforts of Blackstone’s fellow runners and sometimes even the army to shut down a sport that leaves some men dead and others badly injured.

When Blackstone takes an interest in a young black fighter nicknamed Ebony Joe and becomes both his patron and trainer, this brings him into direct conflict with his job, as his boss, Sir Richard Birnie, is determined that the law will be upheld, and when rumours reach him of a fight on which unusually large sums of money have been wagered, he tasks Blackstone with discovering the location of the fight and ensuring that it doesn’t go ahead.

Blackstone’s Fancy is the second in the series of Georgian mysteries written by Richard Falkirk, a pseudonym for thriller writer Derek Lambert, featuring the darkly handsome Bow Street Runner with a liking for fine clothes and even finer weapons. Blackstone worked his way out of one of London’s worst slums and still has a lot of sympathy for anyone trapped in poverty in the horrifically bad conditions Falkirk brings so vividly brought to life.

The series has all the entertaining dash of Georgette Heyer’s Regency novels, but with a liberal coating of cruelty and grime. Blackstone himself is a man of strong principles, but he’s not above beating a confession out of a suspect or resorting to threats and blackmail when it suits him. He happily takes a tumble between the sheets with a wide variety of women, but his liaisons never last long. His longest standing relationships seem to be with his horse, Poacher, and Lawler, a man with a chameleon-like ability to play any part when needed, who works – often reluctantly – for Blackstone when his particular talents are needed.

There are aspects of the book that will not sit well with modern sensibilities, and I had to keep reminding myself that the author was simply being true to the period with the nicknames and insults heaped on the black fighters of the day. There are also uncomfortable parallels with the modernised version of prize-fighting where, despite the use of gloves and rules, men still attempt to beat each other senseless for the entertainment of a baying crowd.

Falkirk’s writing holds a mirror up to the dark underbelly of society in the late 1820s, where cock-fighting, dog-fighting, ratting, badger-baiting and bare-knuckle fighting were all very much the order of the day. And sadly, there are still plenty of people who get their kicks from the same things even now. It’s depressing to think how little progress has been made in the last 200 years.