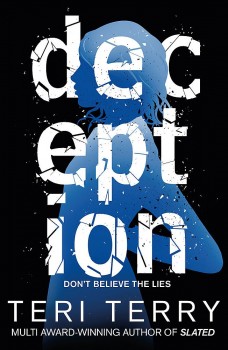 With the country in the grip of a deadly epidemic, Shay has turned herself in, believing she’s the person who started it all. Her friend Kai disagrees and is determined to find her.

A deadly epidemic is sweeping the country. For those who contract the unknown plague it’s an automatic death sentence. Some lucky people are immune, but not many. The government has set up quarantine zones, and anyone trying to leave will be shot. For 17-year-old Shay, things are different. She caught the disease and managed to survive. But wherever Shay goes, people start dying, and she now believes that she’s to blame for the epidemic and, after turning herself in, she’s been taken off to a secret research facility.

Kai isn’t willing to let Shay go, and he’s doing his best to track her down, helped by the ghost of his younger sister who went missing and was killed by fire, a casualty of the research that led to the outbreak of the deadly disease. Kai can’t see Callie. She can only communicate with him through those on the brink of death. Kai wants to find Shay. Callie has an agenda of her own. She wants revenge on the person responsible for her death – the doctor responsible for the plague, and for her death.

I started with the first in this series of YA thrillers, Contagion, which made understanding the early chapters of Deception easier, but Teri Terry lays a sufficient trail of backstory crumbs to lure new readers in and keep them hooked. The chapters alternate point of view between Shay, Kai and Callie, pushing the story on in short, sharp bursts, never sticking with one character for more than a few pages. It’s an effective formula. The lack of info dumps and the frequent changes of focus create a fast-moving storyline with three distinctive narrators, each with their own voice, and their own agenda.

I’ve been a sucker for plague stories ever since the 1970s TV series Survivors, and Deception captures that same feel of a country breaking apart under the strain of something it doesn’t understand and can’t fight. There’s martial law in places, ensuring no one escapes the hastily set up containment zones, with the dead lying where they fall until they can be gathered up for burning, but in most places, they’re simply left to rot.

Deception, as the name suggests, has plenty of surprises in store, and one large twist that I certainly didn’t see coming. I’m now waiting impatiently to see where this story goes next and how it ends.