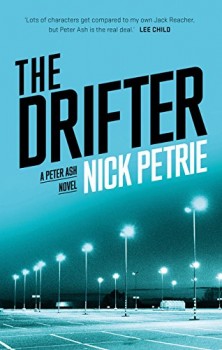 Ex-marine Peter Ash returns home to the US with problems from service in the Middle East, but none sufficient to prevent him helping out the family of a once close comrade.

Peter Ash’s war in Iraq and Afghanistan has left him with difficulties coping with enclosed spaces, and he has spent over a year in the wilderness living out of a truck when he hears that his old buddy Jimmy Johnson has committed suicide. The guilt he feels impels Ash to visit Jimmy’s widow Dinah in Milwaukee, and make a few overdue repairs to her home.

Under Dinah’s porch he finds a suitcase full of cash and plastic explosive, guarded by Mingus, a large, ugly and smelly dog. Dinah knows nothing of the suitcase, but when an aggressive individual calls at the house pushing for information, Ash suspects someone is looking for it. Jimmy was broke, so how he came by the case is a mystery.

Jimmy had had his own problems adjusting to life back home, and had been living apart from Dinah before he died. The bar where he had been working is run by another veteran, Lewis, of whom Dinah has suspicions. While not altogether friendly, Lewis seems to know nothing about the cash.

Ash manages to locate a room Jimmy was using, where he finds a card for an investment company, and a local veterans’ centre that he visited. These clues help to break the case, but what Ash has uncovered is only just the edge of a conspiracy.

Brief intervening chapters to the main narrative reveal to the reader that ‘the man in the black canvas chore coat’ is assembling ingredients for a massive bomb. Ash, Dinah and her family have been cast in the plot to spread disinformation on its realisation.

It is hardly surprising to see a comment from Lee Child on the front cover of the book, as Child’s Jack Reacher is the obvious model for the US vet. Ash is formed from the same mould: a strong and silent type, practical, travelling light, not too fussy on personal hygiene, but who is not quite so egregiously keen to demonstrate his fighting skills, which is all to the good. Whether his ability to manage a serious debilitating mental condition so well is realistic, I wouldn’t know.

Ash is not the only vet in the story. In fact, nearly all the key characters are vets, including two members of the Milwaukee police, Lewis and his friends, and those on the dark side. All seem to be expert in combat, albeit with varying degrees of mental problems. The author makes a plea for US veterans in an afterword, and I am sure this is sincere and fully justified. I’m not sure, however, whether the narrow focus of Nick Petrie’s depiction is likely to advance public understanding of their plight.

Despite the above reservations, I enjoyed the book; Ash is a congenial protagonist and the finale suitably thrilling. I particularly liked Mingus the dog, who rather stole the lead at times.