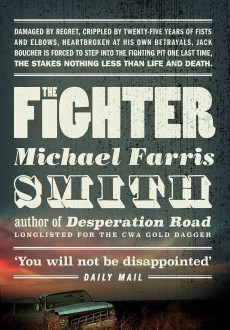 Jack Boucher, who was abandoned as a child, took up cage fighting as a way to find himself, and after 25 years has reached the end of a very long road.

This is the tale of a fighter, set in the Mississippi delta. As a two-year-old Jack Boucher was left outside a Salvation Army store, and after a succession of foster parents found a true home at last with potter Maryann. Despite her efforts, the need to use his fists as a child led Jack to a career as a bare-knuckle fighter. And now, after years of punishing cage fights all over the US south, Jack’s body and mind are severely compromised.

Maryann is now in care and near her end. Jack would like to enable her to spend her final days in the family home, but foreclosure is threatened, and the only money he has is needed to pay off Big Momma Sweet, who runs a gambling palace in the Mississippi breaks. His plans are disrupted by someone who spies an opportunity, and he loses possession of the cash.

The money comes into the possession of Annette, a woman richly decorated with spectacular tattoos who makes a living displaying her body with a travelling carnival. Annette is a woman with an independent cast of mind who is ever on the lookout for the father she has never met, about whom she knows only that he was a fighter, and that his name meant something.

It seems inevitable that the two key characters will find each other, although the circumstances suggest that their rendezvous may have come too late. Jack is no longer in a fit state to endure another brutal encounter in the ring; his body is habituated to punishment but his brain has suffered too many assaults, and when he is forced into a final bout the chance of his survival looks remote.

The characters Michael Farris Smith brings to life might have been found in the works of Emile Zola, flawed beings with a single-mindedness which makes them exceptional. The fighter Jack has had concussion so many times he needs a heavy diet of pills to keep the pain at bay, and relies on a notebook to supplement a failing memory, but soldiers on seeking redemption for sins he has long forgotten.

The setting in which this human drama is played out is a vision of the American south where life is hard, and a man cannot rely on the law to fight his battles. The world of fighting and gambling, and that of Annette’s carny, is a cruel one: of heavy drinking, violence and selfishness, with little by way of redemptive virtues other than that found in the hearts of a few. The tale moves with a seeming inevitability towards its end, confirming the eternal truths of human existence.