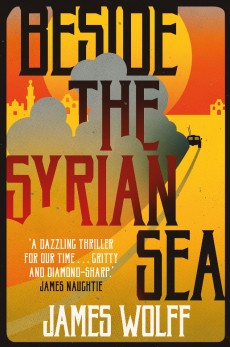 Beside the Syrian Sea

When his father is kidnapped by ISIS, Jonas employs his skills as an intelligence agent. But until now he has been working from behind a desk.

The Rev Samuel Worth, aged 75, is part of a church delegation visiting Syria to offer support to embattled Christian communities when he is kidnapped by ISIS. His son Jonas is told that the British government is working to secure his release, but knows that given a publicly declared refusal to pay ransom and the lack of hard intelligence about his father’s captors the most likely outcome is a videoed execution.

So Jonas takes matters into his own hands, flying into Beirut to make contact with Tobias, an unfrocked Catholic priest who has previously acted as an intermediary between Western governments and Syrian rebels. Jonas has something to offer ISIS: copies of documents which have passed across his desk in his job as an analyst for the British secret intelligence service, documents which would seriously compromise action against them. To Tobias he offers a visa for a girl he wants to get out of Syria.

Jonas’s employers (and their friends the CIA and the Israelis) are awake to the threat he represents and are keeping a close watch on him; his liberty hangs on whether he can fool them, and others, about his intentions. Tobias thinks that Jonas is officially sanctioned and in a position to provide the visa he has promised. Hezbollah get involved, and eventually ISIS, and Jonas’s mission is only sustained by the presentation of a convincing, but different, story to each, often having to be constructed on the spot from hints coming from his opponents.

This book generates excitement from the first page as Jonas, despite his inexperience with work in the field, brings to bear a theoretical understanding of the murky world of espionage and a brilliant mind to bamboozle several intelligence services. Success in securing his father’s release always looks like a very remote possibility as Jonas performs a kind of high-wire act, where any momentary loss of balance spells death for both himself and his father.

Jonas slowly advances his plans, helped by a sharp observational sense and excellent memory for detail, including recall of past intelligence events that could help him negotiate the challenges he faces. An internal dialogue which touches on Jonas’s childhood and his relationship with his father, and his life so far, fills out a picture of a man who is sensitive to emotional nuances but who finds it difficult to form close personal relationships.

The author conveys a convincing picture of the real-life complex mix of aims and realities in the Middle-East, with Jonas’s occasional musings highlighting the peculiar moral compromises made by intelligence operatives, however well-intentioned. Informative as well as thrilling, this is a spy story full of sparkling detail, and sharp as a tack.