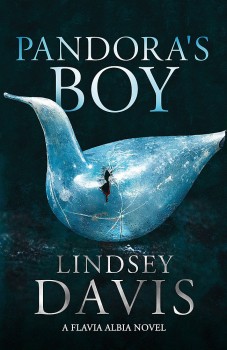 Flavia Albia investigates the suspicious death of a young girl on the Quirinale Hill, home of Rome’s wealthiest and most aristocratic and ancient citizens

The thing about the Falcos is that you always know what you are getting – and the quite brilliant Lindsey Davis never fails with her witty mysteries set in first century Rome.

From the day she introduced readers to the pater familias, Marcus Didius, the Lovejoy of the legions, alternatively freezing and drowning while always on the lookout for a profitable, if not necessarily legal, deal in far-off Britannia, she has kept to a tried and tested format.

Marcus Didius and his wife Helena Justina, the beautiful, aristocratic and imperious daughter of a senatorial family, have now faded almost into the background. The informer who once enjoyed the patronage of an emperor has taken over and expanded his father’s antiques business and is doing very nicely from Roman society, leaving private investigation to his inquisitive, determined adopted English daughter, the one-time London street urchin Flavia Albia.

She may have kept her father’s old office in the distinctly working class Aventine, but having finally landed her equally determined, but rather old-fashioned magistrate husband, Titus, is also very definitely upwardly mobile.

Her sixth adventure opens with Flavia Albia worried about how Titus is recovering from being struck by lightning during their wedding – and even more worried that he appears to be supporting his hostile ex-wife in insisting she investigate the suspect death of a young girl on the Quirinale Hill, home of Rome’s wealthiest and most aristocratic and ancient citizens. The girl was apparently poisoned by a love potion and her death is literally tearing the family apart with her two grandmothers reduced to exchanging insults and blows.

Flavia Albia quickly establishes the source of the missing draught, the decidedly downmarket Pandora, who dominates the local market for beauty products, but whose legitimate trade appears to hide something more sinister.

As she continues to investigate, she soon discovers the supposedly sweeter air of the Quirinale masks the smell of pretentiousness, loose morality, betrayal and even potential gang war, offering her plenty of opportunity to exercise her caustic wit.

From the dreadful ‘Chelsea set’ of rich young things, busy drinking their parents’ money, to rip-off restaurants offering the gullible ‘fresh oysters’ from Britain; the artful street vendor selling lettuce as an aphrodisiac backed by the legend of a phallic Egyptian god; to pompous lawyers, backstreet bars and posh villas, first century Rome is there in its glorious and sinister reality.

You can read this as a standalone, Davis gives you enough background to make sense of the protagonists’ pre-stories, but I guarantee if you are new to her work, by the time you’ve reached the final surprising denouement, you’ll want to read more of it.