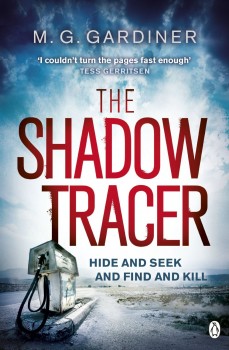 On the day her daughter’s school bus is involved in an accident, Sarah Keller’s world comes apart at the scenes, but not for the obvious reasons. Sarah flees the hospital, accused of abducting her own daughter. Pursued by both the FBI and some very nasty criminals, it’s Sarah’s job to keep them both safe.

M.G. Gardiner’s thrillers are always fast-paced with a great cast of credible characters, but in The Shadow Tracer, she’s excelled herself.

Sarah Keller is a skip tracer, someone who specialises in finding people who don’t want to be found, and then serving them with legal documents they don’t want to receive. After just another morning at work, she gets a call to say her daughter’s school bus has been involved in an accident.

Sarah is relieved to discover Zoe is unhurt, but her problems start when the attending doctor in the hospital turns out to be the boyfriend of the latest ‘skip’ she’s just traced. He’s in an argumentative mood to start with, and it gets worse when something is discovered about Zoe that Sarah has been desperately trying to keep secret.

Things go to hell in a handbasket with frightening rapidity for Sarah. With the help of her friend and boss, ex-Army NCO Danisha Helms, an eccentrically dressed, hard as nails woman who takes no shit off anyone, Sarah gets Zoe away from the hospital, but then the chase is on. She has very few allies, and if Sarah is to keep Zoe safe, she has to stay one jump ahead of fanatical FBI agent Curtis Harker, as well as a very unpleasant trio from bunch of a meth-dealing criminal nasties who think their imprisoned patriarch is some sort of prophet.

It’s hard to tell if the Worthe clan have genuinely got religion, or whether that’s just an excuse for taking underage brides and having as many women as they want subservient to their will, but either way, they really are chillingly unpleasant, and frighteningly real.

The nail-biting pace of the Worthe’s pursuit of Sarah and Zoe reminded me of the cinematic pursuit of another woman called Sarah, also trying to save her child, in one of my favourite films, Terminator 2. The action proceeds at break-neck speed, until I almost felt like I was the one being hunted, and whenever anyone did step up to the mark to help the fleeing pair, I was positively cheering them on.

Sarah finds help in unlikely places, from Michael Lawless, a US Marshall involved in the witness security programme who knows things about Sarah’s problems that even she doesn’t know, and a kick-ass nun with some very useful rally driving skills. Sarah’s own skills as a skip tracer are employed to good effect as she does her best to keep ahead of her pursuers. She’s resourceful and determined, reminding me of that other extremely tough female lead, Zoë Sharp’s Charlie Fox. Gardiner writes great female characters. In fact, scrub that, she writes great characters.