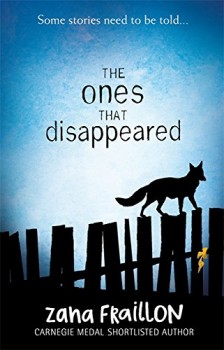 The Ones That Disappeared

Three children live and work as modern slaves, in thrall to a drug gang. When freedom comes, it is both unexpected and terrifying.

Esra, Miran and Isa live and work in a basement. Their job is to water plants that are turned into drugs. To be more precise, Esra, Miran and Isa are slaves, owned by a ruthless gang who brought them from their homes, promising a better life, promising them that they would be able to send money back to their families. But the better life was a lie and they don’t earn any money; all they do is line the pockets of the drug lords. Esra is only 12 years old, but she’s already learned that working with the plants is better than the alternatives that await her.

The children dream of freedom, telling each other stories every night to keep their hope alive, but when it comes, they are friendless and on the run. Esra and Isa become separated from Miran and have no idea how to find him. They find shelter by a riverbank, afraid of the gang, afraid of the police, far from home and with no idea how to get back to their families. Then they meet Skeet and his pet toad, Croakus. They’re determined to find Miran, and now they have someone willing to help them

In Zana Fraillon’s previous book, The Bone Sparrow, she shone a powerful light on the plight of Myanmar’s Rohingya people. In The Ones That Disappeared she turns to the worldwide scandal of people trafficking and slavery, focussing on three children, but raising wider issues that must horrify and anger anyone with an ounce of empathy.

The story is told from the perspectives of Esra, Miran and Skeet. Esra and Skeet’s chapters are in the first person, with Miran’s in the third person. The use of italics in Miran’s passages create an almost dreamlike quality as he lies in a hospital bed, at times hovering in a liminal state between life and death, as the gang proves able to reach him in what should be the safety of the hospital. But for modern day slaves, there are few safe places.

The children’s story is heartbreaking and utterly compelling. The entwined narratives are simple but never simplistic. The world is seen only through the eyes of the three children, so there is no wider perspective and it’s not even clear where they are. Only references to dollars and some quirks of language and police procedure give clues to the fact that they are probably in Australia. Where they have come from is never disclosed. There are glimpses of Skeet’s home life but those, like the rest of the story, exist on many layers, and what seems to be the truth is nowhere near as obvious as it first appears.

The figure of the River Man gives an air of otherworldliness that is never explained, nor does it need to be. It simply adds another layer to a story that is both hauntingly beautiful and starkly terrible. This is a book that gives a powerful voice to those who have no power in a world that should care far, far more than it does about those forced to work as slaves in our towns, our cities and in the countryside. They are all around us, unnoticed, uncared for and voiceless. Zana Fraillon has given them a voice. Now those with the power to effect change need to listen.