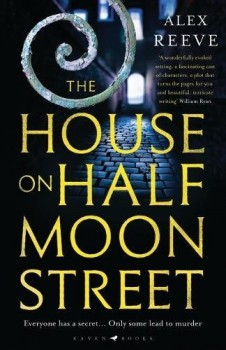 The House on Half Moon Street

Leo Stanhope, a coroner’s assistant in Victorian London, is searching for the murderer of Maria, the woman he loved. But Leo’s investigations will endanger both his life and the secret he has to keep at all costs for Leo was born Charlotte.

Leo Stanhope, assistant to a London coroner, is in love with Maria. He sees her as often as he can afford to visit the brothel where she works. He does his best to blank his mind to the number of men Maria sees, and he doesn’t judge her for the work he does. He loves and accepts her, and he believes she loves and accepts him.

Maria is also one of the few people who knows Leo’s secret; that Leo was born Charlotte, the daughter of a respectable country reverend, who would most certainly not have accepted that his daughter has always known that she was in fact a man. His death freed Leo from the need to live a lie, although he regrets being estranged from his mother at the time of her death, and sometimes wonders if he should have waited until she too had died. His sister doesn’t accept him and doesn’t want Leo in her life.

Leo lives on the brink of poverty with a struggling apothecary and his sharp-as-a-tack young daughter who regularly extorts buns and pies out of Leo whenever she beats him in an entertaining guessing game where Leo has to match the ailment to the remedy.

When Maria is found dead, the finger of suspicion points first at Leo, but then he’s released without charge and a notorious local abortionist, Madame Moreau, is arrested instead. Leo is determined to find Maria’s murderer and embarks on his own investigation, sacrificing his job and endangering both his life and his secret as he delves ever deeper into the murky underbelly of Victorian London.

Alex Reeve’s debut paints a convincing portrait of Leo Stanhope and his struggle to keep his secret in a world that would all too easily condemn him to prison and possibly even the gallows for living as the man he knows he is. Leo struggles to make the connection between Maria’s murder, the brothel where she worked and the death of a man that both he and the coroner believed to have been nothing more than a tragic accident. With the man’s abrasive widow, Rosie Flowers, as a reluctant ally, Leo finally starts to uncover the truth but is forced to pay a high price for the knowledge.

Reeve doesn’t present Victorian London through rose-tinted glasses. It’s grubby, brutal and will make anyone very glad they don’t live then and there. His descriptions of the tools of Madame Moreau’s trade make grim reading, and the lives of the girls and women who seek her services are equally grim. Leo’s partnership with Rosie Flowers is one I hope we’ll see more of as the series progresses, and the growing connection between them sets the scene for one of this excellent debut’s most hard-hitting and painful scenes. This is quality historical crime with a likeable protagonist and a strong premise.