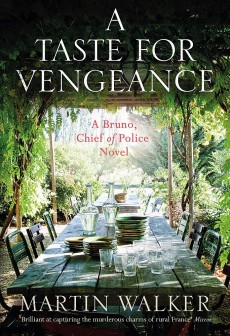 A Taste for Vengeance

Bruno Courrèges, Chief of Police in St Denis, has been promoted and now must deal with a far wider area. His first case in his new role is a possible murder-suicide with links to a terrorist organisation.

Bruno Courrèges, for many years Chief of Police in the French town of St Denis, in the Perigord, has been promoted, and is now responsible for the wider area of the Vézère valley. The promotion brings with it a smart new uniform, a new gun and new pressures, none of which Bruno particularly wants, but a recent review of policing by the Ministry of Justice resulted in Bruno being chosen to head a pilot project for a new system.

For those familiar with the area, his new patch covers Limeuil, where the Vézère flows into the Dordogne, and upstream to Montignac, home of the prehistoric cave of Lascaux, that featured in Martin Walker’s last entertaining combination of cookery, history and policing.

Bruno’s first case in his new role concerns a woman who enrolled at his friend Pamela’s cookery school, but never arrived. She was last seen on a train from Bordeaux, talking animatedly to a man. When Bruno tracks her down, she’s dead, as is the man she was seen with. It’s Bruno’s task to find out whether she was killed in a murder-suicide, or whether both her and her companion were murdered. The forensic examination of the grisly scene isn’t conclusive, so Bruno will have to rely on good old-fashioned police work, while juggling the competing pressures of his new job as he finds himself answerable to rather too many bosses.

As ever in a Bruno novel, Walker mines a rich seam of history to provide the backdrop for his story. In this case he looks at the more recent past, focussing on the Irish Troubles and in particular the killing of three Provisional IRA members by an SAS team in Gibraltar in 1988. Walker’s research is meticulous and his ability to weave historical events into a modern day police procedural is always impressive.

Walker’s love of the area, its history and its inhabitants channels through Bruno and shines from every page, as does his love of the region’s gastronomic traditions. Bruno is now helping Pamela with her new venture – a cookery school being run from her riding school. Pamela, one of Bruno’s ever-growing collection of love interests, is as shallow and annoying as ever, particularly when she resorts to emotional blackmail to get Bruno to take time out from a high-level murder enquiry to run a vineyard tour for her.

The recipes and food-related digressions are mouth-watering (providing you’re not a vegetarian), both in the context of the cookery school and Bruno’s own famous dinner parties. For vegetarians and vegans, take heart – restaurants can now be found in the area that don’t have menus dominated by duck. I can recommend the vegan restaurant in Thonac, if you’re looking for somewhere to eat in Bruno’s heartland. Maybe Bruno will even acquire a vegetarian girlfriend at some point.

I thoroughly enjoyed wallowing in the delights of an area I know and love but I can’t help wishing that Walker would give the Bruno books the same depth he gave to the region in The Caves of Perigord, which was far more a thriller than a police cosy. Some of his characters are starting to turn into plot devices rather than people, with the Baron arriving like a deus ex machina in a crucial scene, and the Brigadier serving to legitimise Bruno’s actions when needed. They are both capable of being far more than just plot devices thrown in to help save the day. The sub-plot regarding a pregnant female rugby player with the potential to make the national squad provided some local interest but didn’t connect to the main story in any meaningful way.

Bruno’s new job brings with it plenty of potential for story and character development and I hope both he and his creator rise to the occasion in future books. There are plenty of towns and villages waiting to be explored, and over 30,000 years of history lying behind some of them. Mind you, with Bruno’s ability to act as a trouble-magnet, the crime rate in Montignac and the rest of the valley is no doubt set to soar to new heights.