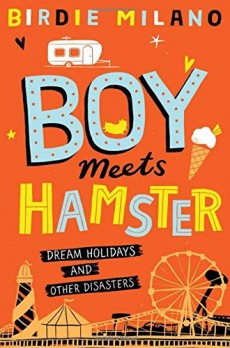 Dylan Kershaw is having to put up with the Holiday From Hell, with added hamsters. But the hot boy in the caravan next door is some consolation. Now all Dylan has to do is get Jayden-Lee to take notice of him.

A summer holiday on a down-market caravan site in Cornwall isn’t 14-year-old Dylan Kershaw’s idea of fun, but his mum got it for the price of a £9.50 coupon and she’s determined the family are going to enjoy themselves. Dylan isn’t convinced. He’s even less convinced when everywhere he turns, he’s confronted with a mountain of orange fake fur in the persona of Nibbles, the site’s hamster mascot. Nibbles is a huge hit with Dylan’s four-year-old brother Jude, but Dylan just wishes the wretched hamster would leave him alone to get on with the serious business of indulging in love at first sight.

As far as Dylan is concerned, Jayden-Lee is the hottest boy on the planet, and he just happens to be staying in the next-door caravan. Dylan can overlook the fact that Jayden-Lee’s younger brother Alfie is a complete menace and that Jaden-Lee has an unfortunate way of referring to Jude’s cerebral palsy, but Dylan is convinced that the object of his crush can be brought to see the error of his ways. Dylan’s friend Kayla is not convinced. She’s equally certain that Jayden-Lee walks like a jerk, talks like a jerk and is a jerk.

But before Dylan can find out of Jayden-Lee is interested in him, he has to run the hamster gauntlet and get past the ever-annoying rodent.

No, Boy Meets Hamster isn’t a crime novel, unless Hi Di Hi-style crappy holiday camps are a crime, which they probably are, but the book is funny, perceptive, and entirely adorable, and makes a refreshing antidote to much of the angst-laden domestic noir doing the rounds at the moment. Dylan’s mum’s obsession with tinned beef and Jayden-Lee’s bullying is about as noir as it gets. Oh, and I forgot, there’s a missing kid at one point, so that makes it a crime book, doesn’t it?

Complete with some comedy gold moments, Birdie Milano’s debut is a fly-on-the-wall look at what it means to be a gay teenager who hasn’t yet found the right time to tell his parents that he fancies boys. His best friend Kayla knows, but that’s what best friends are for. And Kayla knows what it’s like to be different. She’s a spiky teen who’s worried about being away from her hapless dad for the first time. She’s worried about him doing something daft and burning the house down by accident in her absence. She’s also worried that Dylan is going to get his heart broken, because best friends worry about that sort of thing.

Dylan’s little brother Jude is another stand-out character. Milano doesn’t sugar-coat Jude’s cerebral palsy. She throws into sharp relief how people’s superficial perceptions of disability can be so very wrong and presents a strong coming of age story that bucks the pervading heteronormativity of most genre fiction. This is a stylish and affirmative teen romance. Hamster hugs are an optional extra, but be warned, the rascally rodent is everywhere, and will appear when least expected. He’s a huge scene stealer and I loved him! Dylan’s parents are pretty cool, too. This is the perfect book for Pride Month – and any other month.