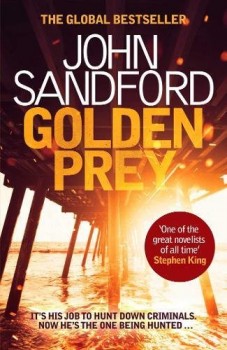 Lucas Davenport is now working as a US Marshal, and sets out to find a ruthless killer who recently robbed a drug cartel. Unsurprisingly he is not the only one in the chase.

You might think that after dozens of Lucas Davenport stories the series would be getting a bit stale, but nothing could be further from the truth. The latest remains as thrilling as the first, with great characters and action from the first page to the gripping finale.

Davenport, irked with the bureaucratic restrictions in his former post with the Minnesota Bureau of Criminal Apprehension, has joined the US Marshals. He relishes the variety of the different parts of the US that he now has to work in and the wider scope for his hunting instincts. His boss in Washington has paired him with a new duo, Bob and Rae, who match the smarts and repartee of his former colleagues back in Minneapolis.

Their quarry is Garvin Poole, who as the book opens makes a raid on a Honduran drug cartel, relieving them of several million dollars and killing five people in the process, including a young girl. Gar has eluded the authorities by killing anyone who gets in his way, and by taking excellent care to avoid leaving evidence which might convict him. In this he is aided by his ‘spotter’ Sturgill Darling, who is the consummate planner of their crimes and assists in their execution.

Davenport employs an innovative approach to penetrate the wall of concealment built by Poole using multiple false identities. Unfortunately someone is hacking police phones to direct a team commissioned by the Honduran cartel boss to recover the stolen cash. This team comprises a shooter, and Charlene Kort, a twisted individual who enjoys using DIY tools to extract information.

The chase zips backwards and forwards across the southern United States as one party or the other identify relatives and friends of Poole, to either be questioned by Davenport or pressed in a rather more challenging manner by the other team, with near misses and several shootouts.

As usual, Sandford takes you into the heads of both the good guys and the bad so that it is difficult not to have an understanding of even the worst characters, and he pulls the reader’s sympathies to and fro. He somehow makes you feel sorry for Charlene Court even as she is sawing the leg off some totally innocent person.

Sandford’s depiction of both police and the criminals they face probably awards both parties something like 50 IQ points more than such characters would have in real life, but who cares – this is great fiction. I try in vain to ration myself when I’m lucky enough to get the latest, but am always left bereft after rushing to the end. My only consolation is that at my age it will only be three years or so and I’ll have forgotten the plot sufficiently to enjoy it all over again.