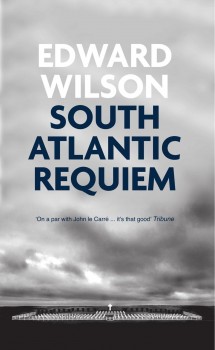 War is building in the South Atlantic as Argentina prepares an invasion of the British Falkland islands. Conflicted MI6 man William Catesby is loyal to his country but will do anything he can to stop hostilities breaking out.

Decorated Special Forces officer Edward Wilson gave up his American citizenship and has settled in rural Suffolk where he lectured at Lowestoft college before becoming a full-time writer. He uses this background as scholar, soldier, and cosmopolitan expatriate to create novels focussed on the ambiguity of espionage and the Cold War, with likeable villains, often detestable heroes, authentic settings and plots based on his interpretation of the facts.

William Catesby is a senior officer in the British SIS, a bloodied veteran of SOE operations in France and Belgium during the second world war. A socialist by conviction, he nevertheless serves his current political masters to the best of his ability. This leaves him with few easy options and he is constantly involved in an elaborate dance around both his own superiors as well as his opponents. By turns cynical, humorous, calm, but capable of deadly manoeuvring and brutal action, he is a quite extraordinary character with whom the reader will find it easy to both sympathise with and also hate.

The basis of Wilson’s clever and brilliantly written story, which explores the byzantine world of high-stakes espionage with a real authenticity and a clear sympathy for the human cost and tragedy of conflict, is history. Margaret Thatcher has become British prime minister on a promise to balance government spending. Budget cuts mean Catesby’s only agent in South America is young Cambridge graduate Fiona Stewart, who is in love with an Argentine polo player, a naval pilot who flies Exocet-armed French-built Super Etendard fighter bombers for his country’s shaky military junta.

The British government has ignored alarm bells from the South Atlantic, sounded when Argentina renewed its claim to the largely forgotten British territory of the Falklands Islands. Desultory talks over the islands’ future have dragged on, with the British foreign office, without the consent of its political masters, happy to consider any solution including shared sovereignty or leaseback without regard to the wishes of the few thousand citizens, all British subjects.

When junta boss General Galtieri orders an invasion, Thatcher replies by sending a Task Force. With thousands of miles of sea to cross, the naval force faces a deadly threat from the ship killer Exocets.

Catesby is ordered to prevent Argentina from obtaining more of the lethal missiles by any means necessary. His increasingly desperate efforts involve cunning, ingenuity and even murder.

In Britain, a battle behind the scenes develops, with those opposed to war including foreign secretary Peter Carrington, haunted by his own memories of World War II, pushing for peace and diplomats and statesmen from around the world racing to find a last-minute settlement. Catesby too criss-crosses continents in a deadly game of cat and mouse determined to avert the loss of life.

So far, so good. But Wilson will hardly endear himself to many British readers by breaking the rule of authorship which cautions against allowing your own political opinions to intrude on the plot. According to Wilson Thatcher was a war criminal, a drunken, intractable, nationalist and populist, whose only motive in risking as many as 3,000 British lives – the early military estimate of possible casualties – was solely to cling to office. So vicious and sustained is his attack that there are even stories I have never heard in many years in Fleet Street, where all rumours eventually wind up! Our, unwilling in this case, American allies, fare little better.

But it’s a stunning and ingenious book, spoiled only by some hard to take statements about politicians and officers long dead. You’ll wind up wondering how much is fact and how much fiction. Make what you like of it.