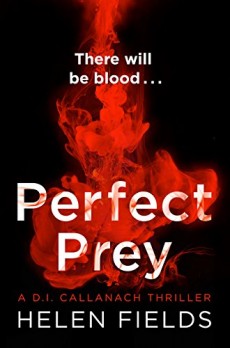 DIs Luc Callanach and Ava Turner are investigating a series of murders in Edinburgh and they are struggling to find any leads – until they realise that graffiti about each victim appears before the murder takes place.

Sim Thorburn, a teenager who does charity work, is enjoying the music at a festival in Edinburgh until his guts are sliced open with a home-made double scalpel device – and no-one sees his attacker. On the same night, the body of Helen Lott, recipient of the long service medal at the hospice where she works in palliative care, is found. She has been battered and then squashed by her bedroom furniture; a particularly violent attack. DIs Luc Callanach and Ava Turner are set to work on these cases but cannot find any motive for the deaths – both victims seemed to have led blameless lives, and the modus operandi is so different for each death.

At the same time, a cyber-crime unit arrives from London, led by DCI Joe Edgar, who rubs Callanach up the wrong way from the start. He has one of Luc’s best coppers, DC Max Tripp, transferred to his unit, and is also interested in DI Turner, for whom Luc seems to carry a torch.

The third victim, Michael Swan, has been awarded the community award for child literacy. His murder is even more grotesque, but there are forensic results which start to suggest that the murders are linked. The staging of each murder is complex - but the methods used are very different, as are the victims, most of whom seem to have done a great deal of good in their lives. It seems impossible to build up any evidence of motives.

There are no breakthroughs until Callanach and Turner realise that graffiti found around the city, referring to the professions of the victims, is actually appearing before each murder takes place. This is both a help and a hindrance – how do you warn such a group of people without causing panic?

This book is complex and very dark, but intensely readable – I could hardly bear to put it down. The characters are compelling. As well as Luc (charismatic, handsome, Scottish father and French mother, questionable past), this book is peopled with great characters – Ailsa, the feisty pathologist, Superintendent Overbeck, who takes over as Luc and Ava’s boss (and she seems to dislike Luc) and Lance Proudfoot, a blogger who wants to be involved in the investigation. Then there is posh, patronising DCI Edgar, and the rather excitable Bunny, Luc’s new neighbour, who only seems to have one thing on her mind . . .

There are twists and red herrings right up to the last page, and I found the book enthralling.