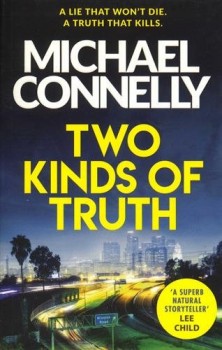 Harry Bosch must go undercover to expose a ruthless drugs gang as well as fighting to protect his own reputation.

Retired LAPD detective, Harry Bosch is still working cold cases for the hard-pressed San Fernando police department and is drawn into live case to lend his expertise to a double homicide. Even after a lifetime in the job, some cases are still capable of getting under Harry’s skin, and the murder of a father and son running a down-town pharmacy is one of them.

The killing was brutal and has all the hallmarks of a professional hit. Harry is determined to bring the killers to justice. But someone from his past is also after justice, and a death row inmate claims that Harry framed him for a murder committed many years ago.

At first Harry isn’t worried by the man’s claims. He knows he didn’t plant crucial evidence, but when even his old colleagues start to look questioningly at him, Harry realises that he’s going to have to take steps to protect his back, so he brings in his half-brother, lawyer Mickey Haller, to protect his reputation and prevent his former employers throwing him to the dogs and leaving Harry exposed to potential financial ruin if the convicted murderer is able to walk free and launch a massive compensation claim.

Two Kinds of Truth proves once again – if any proof is needed now – that Michael Connelly is an absolute master at weaving several plot strands into one seamless hole, and never leaving me feeling pulled in two directions at once, as each of the stories is equally compelling. In one part of the story, Harry has to do something new in his long career, going undercover for the first time in an attempt to get a line on a criminal gang who are exploiting vulnerable addicts in the lucrative and dangerous prescription drugs trade. In the other, Harry must work out who is behind the attempt to blacken his name and let a guilty man walk free, and to do that, he must first work out how incriminating DNA came to be in a sealed exhibit box.

I’m a late convert to the Harry Bosch books, but am thoroughly hooked now. I’m also getting more and more interested in his lawyer half-brother Mickey Haller. Haller is smart, streetwise and not above playing some very high stakes courtroom strategies. Even though he comes over as somewhat unprincipled at times, it’s hard not to like him, and after 25 years in the legal profession, I can certainly say that Haller is someone I’d want watching my back in a tricky legal situation.

Harry is as likeable and principled as ever, and I was outraged on his behalf that some of the people who should have known better seemed to be entertaining some doubts about his past actions. There’s nothing one-dimensional about Harry. He’s missing his daughter, who’s now away at college, and his loneliness comes over quite starkly at times. Unlike the main characters in some prominent crime series, there’s always the sense with this series that Harry is changing and growing with time. He’s a man who can’t walk away from life as an investigator, but it’s getting harder for him to do the job he loves.

Despite the length of the series, Harry Bosch as a character is nowhere near needing pensioning off, and in his next outing, we’re promised a combination of him and Connelly’s newer creation Renée Ballard, a detective who works the night shift in Hollywood. Two Kinds of Truth left me wanting to know where one of its plot strands will go next, and in Dark Sacred Night, the next in the series, I hope to find out. US crime series really don’t come much better than this.