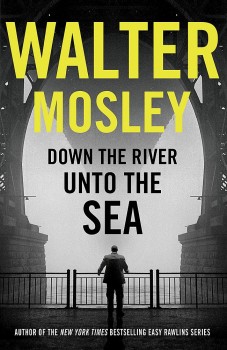 Down the River Unto the Sea

Joe King Oliver, a New York PI who is still coming to terms with being ousted from the NYPD, is invited to help a black radical accused of killing two crooked police detectives.

Joe King Oliver was a promising young NYPD detective whose career was brought to an abrupt halt when he was framed for a rape. His wife declined to provide bail, and King had a brief but traumatic stay in Rikers Island before being ignominiously dumped from the force.

For the last ten years he has been working as a private investigator, shutting out the past and putting his daughter Aja-Denise at the centre of his life. As the book opens, however, he receives a letter from the woman who was instrumental in his downfall, and simultaneously a new case which demands his attention.

We get an early indication of King’s style from an ongoing case, an investigation of a politician. King finds plenty of ammunition for an opponent, but a little digging raises doubts about who commissioned the report. King dislikes being played, and passes up the opportunity to take money from either party: despite his bitterness about the way his life was derailed, he maintains a strong moral sense.

This early episode also suggests that King is nobody’s fool, and so it proves as he tackles the two major jobs in hand. His research into his own case eventually unveils why he was set up, and by whom. The other task is brought to him by Willa Portman, a lawyer on a team supposedly working to defend Leonard Compton, also known as A Free Man, accused of killing two NYPD detectives. The lead lawyer on the case is backing off, and Willa asks King to find out why.

Walter Mosley’s fiction encompasses a number of protagonists, Easy Rawlins being the best known, and as usual the lead actor is a black man negotiating the challenges faced by his minority. For King, colour is less of an issue and there are fewer conflicts than for Rawlins, but there is still a characteristic sensibility about his approach to life that gives the character a particular flavour. King has a particular skill in moving through the New York underworld, working his contacts and using his sophisticated understanding of the way things work to pick up information and solve his case.

Mosley fans will also recognise the Chandleresque plot complexity, sustained by rapid action throughout, with barely a pause for breath. I like it that King is a reader, dipping into Hesse or other favourites, although he never seems to get the space to complete a book. When King decides to make a move, however, he is capable of great audacity, and this generates episodes of real excitement.