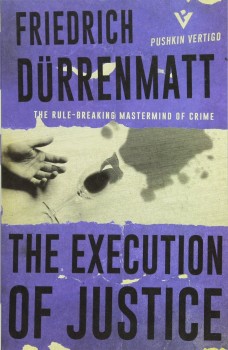 The Execution of Justice

A man of substance walks into a restaurant, shoots a man dead, and strolls out. He is convicted of the crime, but then hires a lawyer to establish his innocence.

Dr Kohler, a successful businessman and politician, enters a Zurich restaurant and walks up to a table occupied by two other local worthies: university academic Professor Winter, and financier and sportsman Dr Benno. Diners at other tables watch Kohler shoot Winter in the head and then take his leave.

The tale is narrated by Spat, a young lawyer, who writes some months after the event. From the beginning we are aware that Kohler is at liberty, and that thanks to Kohler, Spat is discredited and desperate. Spat’s involvement followed Kohler’s conviction for the murder, which was fast and not disputed. Imprisoned for his offence, Kohler offers Spat a large sum to investigate the possibility of another culprit.

Spat knows Kohler’s guilt to be plain, and has concerns as to what Kohler is up to, but is unable to resist the commission. Spat then relates the investigation that follows, and the legal machinations which secure Kohler’s release. On the way, a background of enmity is revealed between the affected parties, and several more deaths follow.

This is a complex and multi-layered book. It was first published in 1985, but was begun early in Friedrich Dürrenmatt’s career and underwent several revisions before eventual release. There was apparently no attempt to bring the story up to date, which still has the feel of the 1950s and in particular the stuffy bourgeois atmosphere of a provincial Swiss town at that time common to the author’s other books.

The main theme, subversion of the conventionally understood process of crime, detection and punishment, is one for which Dürrenmatt is famous. Whether the perversion of justice in the way depicted here is realistic is something for the reader to decide. The question also arises as to whether Kohler’s actions make sense and could reasonably be expected to produce the result he achieves, something which some readers may find hard to swallow.

The real difficulty with the book lies more with its wordy circumlocutions, protracted sentences (some nearly a page long) with innumerable sub-clauses, pages and pages with no paragraph breaks, and frequent diversions into abstruse debate. This free expression might be understood as an expression of the mental state of the narrator, were it not that the literary style continues with the introduction of a new voice in the final part.

The dense accumulation of detail which substantiates the action is impressive, but merely adds to the challenge to the reader’s attention span, and I suspect that few would be sufficiently stimulated by the philosophical issues raised to persevere to the conclusion.