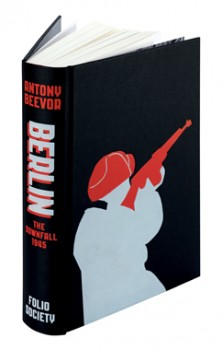 The story of the Red Army’s capture of the German capital in World War II’s final stages.

This lavishly presented  – slipcase, boxed, blocked-cloth cover, printed endpapers, 32 pages of black and white plates and 16 integrated black and white maps – is the definitive account of the fall of Berlin and the end of Hitler’s Third Reich, and quite rightly the non-fiction winner of last year’s Folio Readers’ Choice.

Antony Beevor, the pre-eminent historian of the Second World War, has produced a masterpiece that is a gripping and frequently harrowing account of the Red Army’s capture of the German capital which marked the end of the war in Europe. Beevor records with impeccable research and formidable skill the brutal death throes of Adolf Hitler’s Thousand Year Reich at the hands of a vengeful and often out-of-control Red Army. He combines a soldier’s understanding of war’s realities with a novelist’s eye for detail. This is an irresistibly compelling narrative of quite terrible events as more than seven million civilians fled westwards from the advancing terror and the plotting and shortcomings of the men at the centre of them.

The Russians had much to avenge when their enormous two-and-a-half million strong armies reached the Reich frontiers in January 1945. Political ‘instructors’ had rammed home the most horrific stories of Wehrmacht and SS brutality during Operation Barbarossa, the failed German invasion of Russia. The result was a terrifying manifestation of ‘cleansing’ by fire and sword, with the huge Stalin and T34 tanks crushing refugees under their tracks, mass rape, pillage and destruction. Hundreds of thousands of women and children froze to death or were massacred because Nazi chiefs, refusing to face defeat, forbad evacuation.

The confrontation between the hubris of the ailing, arguable insane Führer, willing to sacrifice Berlin and all its inhabitants, and Stalin’s ruthless determination to seize the city ahead of the Allies at any cost, was the ultimate battle between two of the most powerful military leaders in history.

From the senior German, Russian and Allied commanders to the foot-soldiers of the Wehrmacht and the various Russian armies and the civilians caught in this bloody swathe of destruction, Beevor reconstructs the experiences of millions caught in the Gotterdamerung of the Reich’s final collapse.

In a terrible tale of pride, stupidity, fanaticism, revenge and savagery, but also one of endurance, self-sacrifice and survival against all odds, he highlights the almost inhuman cruelty of both main players, happy to sacrifice any number of lives to achieve their ends, as well as acts of startling kindness, generosity and compassion.

The Nazi dictator’s increasingly paranoid and delusional behaviour; the 14-year-old Hitler Jugend sent on bicycles on suicide missions against Soviet tanks; the ferocious battle for the Reichstag; the horrors of Allied bombing raids; the SS and Feldgendarmerie squads roaming Berlin hunting for ‘deserters’, all are there. The total ruthlessness of Joseph Stalin, demonstrated in his Great Purge when from 1934-39, he exiled, imprisoned or executed hundreds of thousands who might oppose him, his total domination and manipulation of his top commanders, his desire to create a Communist empire, and the cunning and duplicity with which he pursued that aim, contrasts sharply with the naivety of the American military and political leaders.

The rapidly ailing patrician President Franklin Roosevelt, trying to control events, while failing to recognise Stalin’s total lack of candour and calculated lies when exchanging information and the over-cautious Supreme Commander of the Allied Forces, Dwight Eisenhower, anxious to preserve American lives as the war’s end neared, were both comprehensively conned by the wily Georgian. British prime minister Churchill was more sceptical, but over-ruled by his senior partners and the antics of the self-promoting Montgomery did little to support his arguments.

Beevor ponders the behaviour of the Soviet troops – mass rape by up to 20 soldiers at a time was common – and while offering examples showing the Allies were hardly blameless, concludes that a lack of discipline, coupled with the incitement before battle in an army where brutality and low rations were the norm, created an inevitable outcome as Red forces encountered the comparatively well-off German populace.

The book closes with a masterly summary of how main participants were in fact losers and Europe lurched into its long polarised and confrontational state despite Russian military and political objectives having been achieved. The 60-plus year Cold War that followed all seems sadly inevitable. This heavyweight is Beevor’s tour de force and marks him out as one of the great military historians of this, or any other century.