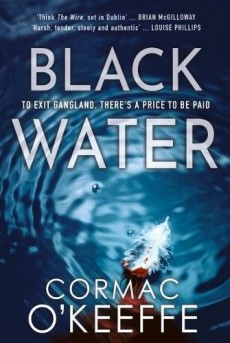 Ten-year-old Jig is recruited into a vicious Dublin street gang. Undercover Garda Shay seeks to save the boy, but puts his own family at risk.

This explosive debut from Cormac O’Keefe, the security correspondent of the Irish Examiner, brings a whole new meaning to the word noir.

It’s set in a part of Dublin tourists are better off avoiding at all costs, and is an unremittingly bleak, shocking, dark and desperate look at the gangland communities who have gathered in the run-down streets near the Grand Canal.

O’Keefe has lived in the area for many years and his professional and personal lives, with access to both the police and the community, have sparked a truly horrifying novel, giving it an intensity, authenticity and originality that can only come from experience of his subject. This is the world of the Dublin gangs in chilling detail ­– where the ruthless enlist the desperate to prey on the vulnerable ­– and no one is safe.

Ten-year-old Jig has little in his life apart from a talent at football and his dog. His mother is a slatternly drunkard, his father in and out of prison, his violent and unstable elder brother already deeply involved with the area’s most vicious drugs supplier. The boy is desperate to belong and when ‘Ghost’, the sinister and brutal gang leader, offers him little jobs carrying messages, he is proud to feel part of the ‘crew’. But it all goes wrong when a note demanding a woman stop talking to police about her addict son’s disappearance leads to her collapsing, hitting her head in the fall and dying.

Shay, Jig’s football coach, recognises the boy’s writing and determines to save him. But Shay has secrets of his own. A Garda, he has been forced to operate undercover by a ruthless and ambitious senior officer blackmailing him over a brutal attack on a thug who had attempted to rape his wife, and is becoming increasingly unable to cope with the area in which the family must now live.

Meanwhile Garda Tara Crowe is determined to clean up the gangs, with Ghost and his crew her main target. But each time she gets close, something happens and she begins to suspect a mole within her own service.

The situation explodes when a female Garda is killed and a male officer left in a coma. All police resources are focussed on the case – which also attracts the attention of a veteran IRA killer determined to bring the organisation back into popular favour by ridding the community of the gangs who prey on them.

The twisted strands all come together in a climax that is predictably explosive and violent – and with one more unexpected turn!

Black Water moves at almost breakneck pace and is brilliantly plotted and totally compelling. This depressing and horribly realistic story marks O’Keefe as a powerful new writer on the contemporary crime scene and is a book not to be missed!