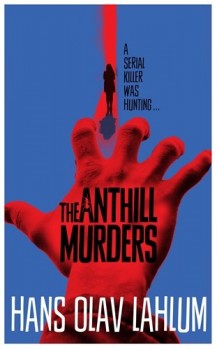 1972. A serial killer is hunting young women in Oslo. He strangles them and leaves a cut-out picture of an ant by each body. Brilliant Inspector Kolbjørn Kristiansen fears that he won’t be able to catch the murderer.

The Anthill Murders, the next instalment in the Inspector Kolbjørn Kristiansen series, immediately sets up the sophisticated tone of the novel. Hans Olav Lahlum has honed his impeccable style, beautifully translated by Kari Dickson, and again we can expect mystery, intrigue, musings on the changing Norwegian society, and the main character’s talent for detailed analysis of every tiny aspect of the investigation, plus the hour-by-hour account of the procedural steps taken.
K2 is the young rising star of Oslo police department, hence the nickname, but cannot shake off memories of Miriam, his ex-fiancée who had decided that there was no future for them together following the events a month earlier in Chameleon People. Now, in April 1972, K2 feels free yet reluctant to embark on a new relationship with his long-standing secret collaborator and a genius, the wheelchair-bound Patricia: rich, sarcastic, extremely intelligent and alluring. He considers her as a partner in solving the crime rather than a woman in her own right. Additionally, he’s concerned about what others might think about him in terms of his professional abilities and standing as a decent, honourable man.
Private thoughts of turning solid friendship into a romantic union aside, K2 struggles with a series of murders committed in Oslo.
Firstly, a young woman is strangled on her way home after meeting a friend late at night. Police are baffled by her intact clothes and no physical evidence other than a cut-out image of an ant left at the crime scene. Bright and beautiful Agnes, a minister’s daughter, was a student of theology, living with her parents, and apparently with no sexual experiences. Investigating her closest circle, family, university tutor and best friend Nora shed no light, other than presenting a picture of a proud woman firmly committed to her faith.
Two days later a jazz singer is killed in the same way. Lise seems the opposite to Agnes: creative, wild, promiscuous and insatiable, and sadly not really grieved for by her estranged family. A link between two women is discovered as they both used to sing in a choir when they were teenagers but nothing else follows.
Although K2 works closely with his astute sidekick Vilhelm Helgeson and bounces ideas off Patricia, he’s nowhere near closing the case. And as feared, no one is surprised when a third strangled victim is found. This time, however, Amalie, the only daughter of a hotel business emperor, quiet, lonely and timid recently-engaged, has been dumped in a caretaker’s cupboard at a big shopping centre. The heiress to one of the largest fortunes in Oslo is mourned by her devastated father and fiancé.
We have an inside knowledge via the killer’s reflections punctuating the novel. The ‘Anthill Murderer’ craves attention, fame and total control over the lives and deaths of women who have met yet ignored him, and as K2 and Patricia suspect, he is initially just like an ant: purposeful and invisible in the greater scheme of things but feeling more powerful and resourceful with each new planned murder. The final revelation shocks everyone.
Again, Lahlum perfectly executes the social context, full of nuances and politely delivered opinions, and firmly established boundaries between social classes. The quite conservative and precocious Inspector finds himself often irritated when conversations about God and faith in the modern times create personal dilemmas stopping people from divulging potentially helpful information. But he’s still definitely one to watch.