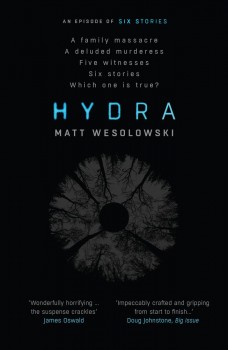 Investigative journalist Scott King delves into a family massacre, told by the killer and five witnesses, through six podcasts.

Matt Wesolowski entered the crime fiction sphere via the unique format of telling the story through written podcasts. Obviously in book form you need to read them, but the rhythm, calm explanations and some repetition of established facts and new information make them quite hypnotic. Although focusing on a main character, the unique narration seems to put the investigative journalist Scott King at the heart of things. He wants to create a platform for discussion, something akin to a book group.
In Hydra, King looks back at the Macleod Massacre of November 2014 when 21-year-old Arla Macleod killed her family with a hammer. She had never denied her part in the killing, and pleaded guilty to the manslaughter of her mother, stepfather and sister. The family moved from Saltcoats, Ayrshire when Arla was two years old to ‘a shit little, angry town’, Stanwel of mining tradition in Lancashire.
Arla’s mother Lucy was staunchly Catholic, just like her new husband Stanley who had saved her after she had escaped from the abusive father of her daughters. She was very conscious of keeping up appearances. Sister Alice was a year younger than Arla, prettier and successful. Yet as more snippets of recorded material come from various people who knew Arla, sibling jealousy might not have been the trigger for murder but something entirely different.
Arla was found guilty but for reasons of diminished responsibility was then incarcerated in a medium-security mental health institution called Elmtree Manor. In the years following the murders the media speculated wildly about the possible reasons of such an unprecedented attack but Arla herself was not interested or involved in any speculations.
Instead, her old neighbours had lots to say. It was agreed that she was unable to decipher reality from fantasy at the time of the killings. She might have suffered from schizophrenia, or deep psychosis. However, she decides to speak to King, famous for his podcasts of Six Stories and for his measured non-judgmental attitude towards people, both witnesses and victims of the crimes, and those who have been affected by what had happened or who have strong opinions. The telephone conversation is conducted in the presence of staff at Elmtree Manor and of course King isn’t in a position to verify authenticity of what has been said, yet he seems to gain her trust, and again realises that ‘monsters can only be made, monsters are not born.’
As King edits the interviews and prepares the podcasts he gets caught in a sinister world of online games, deadly forbidden rituals, and mysterious black-eyed kids who appear out of nowhere and never leave. Elements of supernatural and horror are mixed with some logical clarifications and events from the past. The unsettling tone of Hydra is magnified by King’s own experience of being intimidated by an online troll who has gained access to his personal data, and wants him to abandon the project. Threats and intimidation aside, he continues with his intention to present a solid honest view of the murderess. Hydra is certainly chilling.