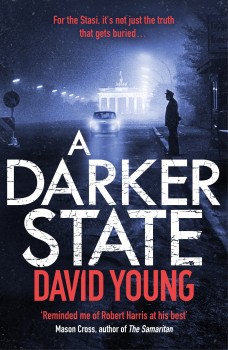 Newly-promoted Major Karin Muller is assigned for action when the body of a young man emerges from a river between East Germany and the Polish border.

This is the third outing for Major Karin Muller of the East German People’s Police, set in 1976. Muller is on maternity leave and surprised to receive a two-step promotion to major, which comes with a new flat. Her reservations about what the advancement implies are vindicated when her leave is abruptly terminated with a direction to attend the discovery of a body out east.

The corpse carries a tattoo linking it to a local football team, a team which enjoyed national success before a payments scandal led to their expulsion from the upper leagues. The Yugoslav players who lost lucrative contracts might have a motive, especially as the dead man is rumoured to have exposed information which led to the debacle.

A coach at the team guardedly reveals facts which suggest another direction for investigation. The dead man was gay, and despite official announcements of tolerance, gay people suffer from considerable prejudice. The coach directs them to a club on the outskirts of town known to be a focus for gays.

The narrative jumps backwards and forwards over the few months between June and December 1976, staying mainly with Muller but with occasional glimpses of activity elsewhere. One first-person voice in particular puts in a regular appearance, that of Markus, the son of the technician Schmidt who works closely with Muller. Markus falls into the hands of the Stasi, the Ministry of State Security, and when he goes missing his parents make a desperate appeal to Muller to find him.

Despite her promotion, Muller continues to work as a case officer with her subordinate Tilsner, and Schmidt. Her belief in the DDR as morally superior to the capitalist West remains intact despite her experience that the Stasi continually obstruct or divert her efforts to restore justice. Such is the power of the Stasi that she is at risk personally if she gets in the way of Stasi operations, and it is only the intervention of a high-ranking Stasi officer, Jager, which keeps her in play.

In fact, we hear some Stasi officers at one point discussing Muller, and how her elevation in rank makes her vulnerable to pressure and thus more easily manipulated for Stasi purposes. It is a moot point whether in reality the Stasi would have ever considered such subterfuge necessary to achieve their ends, and at the same time whether the People’s Police could be so transparently suborned.

I have to admit to some ambivalence towards this series. On the one hand, the author has clearly done his research, and the ominous spectre of the Stasi behind every activity provides a chill only paralleled by the winter weather. At the same time, Muller’s certainty that truth and justice will out seems naive to the point of stupidity, and I’m beginning to lose patience with her.