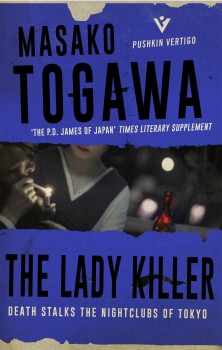 Ichiro Honda spends his weekday evenings cruising the bars for lonely women who can fulfil his fantasies. Then his pick-ups start dying.

Ichiro Honda’s wife prefers to live with her father in Osaka, so during the week Honda stays in Tokyo to work. In his weekday evenings he has a rich fantasy life: he rents a small flat where he can dress up as a foreigner, and strolls around the bar district picking up lonely women who are game for brief sexual adventures.

Some of his partners are as casual as Honda himself, but not all. Keiko Obana, aged 19, falls pregnant, and depressed at the prospect of a life without the man she fell in love with, kills herself. Honda barely notices, but Keiko’s sister Tsuneko is angry enough to think of a way to make him pay.

Honda keeps a ‘hunter’s diary’ of his conquests, so is familiar with their names and addresses, and is surprised when the names with which he is so familiar start appearing in the newspaper as murder victims. Eventually the police establish a link, and Honda finds himself facing the death penalty unless his lawyers can find the evidence to exonerate him.

In the second half of the book the focus changes to Hajime Shinji, a young defence lawyer assisting his senior Kentaro Hatanaka, a man capable of looking under the surface. Hatanaka is convinced that someone has framed his client Honda, and Shinji does the leg-work. A crucial element in the case is the accused’s rare blood group, AB Rh-negative. The investigation narrows to the few others in Tokyo with the same group, whose bodily fluids may have been used. This is 1963 and with no DNA analysis, blood typing is one of the few ways of narrowing the field of suspects.

Hatanaka’s masterful analysis and Shinji’s work on the street eventually demonstrates that Honda is not guilty of the murders, although the date for trial is rapidly approaching and it is unclear whether the evidence gathered will be sufficient to clear him in court. The book ends with a twist, when the reader finds that he or she has been labouring under a misapprehension.

The book provides small glimpses into Tokyo life: flats with tiny rooms, miniscule bars and restaurants, urban sprawl so haphazard that you need a map to find anywhere. Although it is set over 50 years ago, it doesn’t feel particularly dated. Japanese preoccupations can sometimes come across as very odd to a Westerner, but here one can imagine the plot translating to a foreign context without much difficulty, especially if you relish strong emotion concealed behind a polite façade.