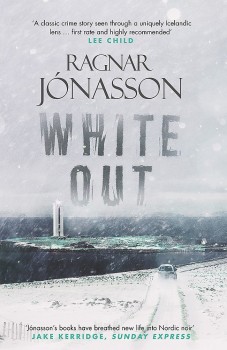 Two days before Christmas, a young woman is found dead beneath the cliffs of a deserted village. Siglufjörður’s detective Ari Thór and his former boss Tómas investigate whether she jumped, or whether something more sinister or supernatural happened to her.

I’m drawn to lighthouses and their strength, standing still in the most severe weather conditions. And it’s not only me. Tourists often travel from far away to see magnificent structures in the most remote locations, and the pull appears to be no different in Whiteout. Local man Arnór and his wife plan to offer horse-riding attractions and to build chalets for the guests keen to experience the isolation and harsh beauty of the bay. Remains of an old settlement nearby which declined due to the Depression and low prices for fish only add to the place’s appeal.
In 1983 the majestic lighthouse by an old solid house at Kálfshamarsvík attracted a small family with Kari at the helm as the lighthouse keeper. Yet soon a double tragedy struck. His wife fell down a cliff, and two years later his four-year-old daughter Tinna died in an identically terrible way.
The older girl Ásta, then five, was sent away to relatives soon afterwards as devastated Kari couldn’t cope. Ásta hasn’t been to the house for a quarter of a century until she returns just before Christmas. And it isn’t clear what has brought her back. But financial problems, lack of meaningful jobs and unhappiness have plagued her as if the dramatic past has been constantly following her.
All this information reluctantly surfaces when Ásta’s body is found in the same spot where her mother and sister had died. What looks like an accident or suicide clearly is a murder. Ari Thór from the police station in Siglufjörður and Tómas, his former boss who had relocated to Reykjavik, do not leave the witnesses in peace and the tension grows, just as the idea of a peaceful Christmas is being shattered – especially the Christmas Eve tradition of reading books well into the night, forgetting the unjust world, personal disappointments and secrets.
In classic Christie style Ragnar Jónasson places the main four characters in the cross-fire of their own and detectives’ questions. There’s over-confident Reynir Akason, current owner of the property and occasional visitor to the house maintained by two elderly siblings; calm, quiet and strong as an ox Oskar who has never ventured far from the area; Thóra, whose promising future and studies at the college in Reykjavik have been cut short by a disastrous event; and Arnór who has grown up nearby. Also, all of them have been in the area when previous deaths had occurred.
The author masterfully portrays loneliness and isolation. Ari Thór still struggles with own identity and impending fatherhood, and apparent mood swings of his heavily pregnant girlfriend Kristín. She digs into her own family’s history but he’s reluctant to voice and share any memories of his dead parents.  These two lonely people try to create togetherness and there is some hope for them. Tómas, on the other hand, can’t wait to wrap up the investigation quickly and return south to his wife.
The fifth and final instalment of the Dark Iceland series set in northern Iceland gives a fine snippet of Icelandic society hidden between the lines, in descriptions of unforgiving living conditions and in people’s conversations. The divide between poor and rich is still visible, especially when it comes to respect, or lack of it.  Whiteout, in an excellently smooth translation by Quentin Bates, leaves a sense of unease and sadness that will linger for quite a while.