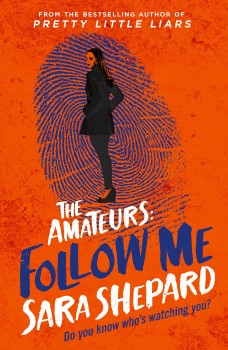 Internet sensation Chelsea Dawson has gone missing. Her kidnapper was formerly a member of a group who had successfully solved a cold case murder and he is now sending taunting messages to his former friends. If they don’t solve the clues he’s setting for them, Chelsea will die.

The Amateurs, a group of friends who met originally through a website devoted to solving cold cases, are together again, this time looking into the disappearance of Chelsea Dawson, whose revealing photographs and videos have gone viral on the internet, bringing her followers from around the world.

Chelsea is petite, blonde and attractive, just like Helena, Aerin Kelly’s dead sister, whose murder had brought the group of friends together. Seneca Frazier is certain that Brett, who’d infiltrated their group, had fed them all the clues that had led them to the likely murderer, covering up his own involvement in Helena’s disappearance and death, and now Chelsea, who bears an uncanny resemblance to Helena is missing, and Seneca is certain Brett is involved.

The Amateurs are still reeling from being duped by someone they’d trusted and Brett casts a long shadow over them as they start digging into the circumstances of Chelsea’s disappearance. Seneca and Aerin are joined by their friends Maddox Wright and his younger sister Madison and the group are soon involved in a game of cat and mouse with this former friend as Brett sends them taunting clues, coupled with the threat that if they are unsuccessful in solving them Chelsea – and others – will die.

Sara Shepard’s young sleuths are an entertaining mix of Nancy Drew and the Scooby Gang as they pit themselves against Chelsea’s kidnapper, working their way from one clue to the next. There’s a very definite pesky kids vibe to the investigators, but there’s also an air of real menace that comes through well in the chapters told from the point of view of the kidnapper, who takes a twisted pleasure in forcing Chelsea to dress up and wear make-up to please him. There’s a strong sense that Brett could turn very nasty at any minute.

The book relies very heavily on a knowledge of the previous book to establish the characters and their backstories in the reader’s mind, and although Sara Shepard does a good job of drip-feeding the necessary information while treading the fine line between backstory and unwieldy info dumps, readers coming new to the series are likely to struggle to connect with the group, at least in the early stages.

If you’re coming new to the series, my advice is to stick with it. The characters are likeable enough to carry the plot, there’s plenty of teenage angst, and a decent mystery at the heart of this YA crime thriller.