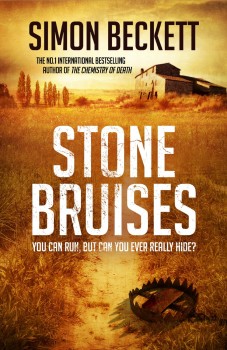 Sean is on the run in a stolen car. He eventually ditches the vehicle, but blunders into a man-trap on a lonely French farm. Rescued by the elder of the farmer’s daughters, he realises he has blundered into a realm of dark secrets which at least one of the family is willing to kill to protect.

Simon Beckett made his reputation with the series of thrillers featuring forensics expert Dr David Hunter. Now in a complete break, he explores the questions of residual guilt and the strange, often twisted relationships of a small rural French community.

Sean is on the run from both police and drug dealers in a stolen car. He manages to flee to France, but when he abandons the vehicle near an isolated farm he walks into a vicious man-trap. He's rescued by the elder daughter of the farmer who treats his injuries, and at first he thinks he has found the ideal hideout – then realises that their isolation may hide secrets even more horrendous than his own.

With the stories of Sean’s life in London and his doomed relationship with the talented, but addicted, Chloe, and his new life in France running in parallel, Beckett exploits the opportunities to examine his hero’s feelings of guilt and inadequacy with his earlier life while ratcheting up the tensions of the strange environment in which he now finds himself.

Sean is basically a weak character, a drifter, boasting a near-useless degree and wandering from one dead-end job to another without mastering any – a point cleverly highlighted by his use of cement to point a dry stone wall where any Frenchman south of Chartres would use the much cheaper and traditional lime-based mortar known as crepis.

Having lived in rural France for more than ten years, I rate Beckett’s descriptions of life and his characters as absolutely spot-on. The taciturn, suspicious and surly M. Arnaud is almost stereotypical – my own village has two! The vicious gossip and prejudices of the nearest small town and the growing generational gap in attitudes is also completely accurate. All this provides a believably solid base for a sordid tale of greed, incest and murder which Beckett delivers with pace and a steadily-building tension which at times borders on the creepy and is never less than intelligent and clever.

If you want blazing action, this beautifully written book will disappoint. But if you want a thoughtful, well-constructed thriller with some unexpected twists and a particularly surprising climax, Beckett will offer you a riveting read.