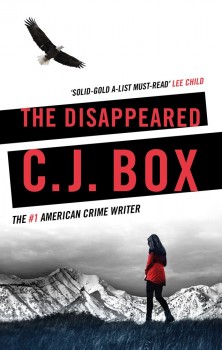 The new Wyoming Governor asks game warden Joe Pickett to investigate the disappearance of a British woman, which is creating a stir in the British tabloids.

In this, his 18th outing, Joe Pickett is surprised to be called in by the new Governor of Wyoming and told to find Kate Shelford-Longden, CEO of a British advertising company, who went missing after a stay at the Silver Creek Ranch in Saratoga. The appointment is puzzling: the Governor dislikes him, and since the police have been pulled off the case it seems unreasonable to expect a game warden to have better success.

But an order is an order, and Joe can look forward to meeting up with the eldest of his daughters, Sheridan, who is a horse wrangler at the ranch. So Joe makes the drive to Saratoga, a small town up in the mountains where everybody knows everybody else. Joe has barely arrived when his hotel room is entered and his Kate file stolen, showing that he is already under scrutiny.

A massive wind-power scheme dominates the local economy nearby, something that Joe’s falconer friend Nate says is killing eagles. Nate wants Joe’s support in representations to the government, which has recently withdrawn permission for falconers to fly eagles, with a detrimental effect on farmers, according to Nate. Joe is happy for Nate to stick around while he deals with the Kate matter first.

In another part of town, someone is using sawdust burn-off at a local sawmill to illegally dispose of items which a local resident recognises from the smell to be animal. After she raises her suspicions with the authorities, her car ends up in a roadside ditch. The reader is made aware of two nefarious characters involved in these matters, although it is some time before Joe and Nate link them to what has been happening.

As usual with the Joe Pickett series there is plenty of action and an interesting setting: the uplands of Wyoming. This particular story is set in winter and the beauty of the mountains in the snow is well conveyed. Whether you would want to live there is another matter; tolerance of cold and a comprehensive survival pack would seem to be indispensable. Also, everyone seems to wear designer gear; at one stage I was stirred to speculate about product placement in fiction.

What is new is the incorporation of British characters: Kate, her sister Sophie and Billy Bloodworth, reporter for the UK tabloid Daily Dispatch. The English are known for heavy drinking and for having really competitive reporters, apparently. Joe and Nate describe Bloodworth, a squirrelly paparazzi, as a fop, which was a little confusing. The English do not emerge well from this tale. I am devastated to report that we are not universally loved in the US, although we do of course have very cute accents.