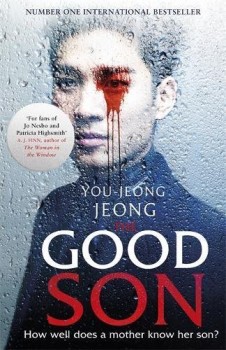 A young man wakes up in his own bed and is confused to find he is covered in blood. Discovery of a body downstairs starts to trigger memories about what has been going on.

Yu-jin, a man of 25, lives with his mother and his adopted brother Hae-jin. He takes medication, remotrol, at his mother’s direction to prevent epileptic fits, but resents the dulling effect on his senses and periodically flushes his drugs. He hears voices in his head, particularly those of his mother and his aunt, warning him to correct his behaviour.

It is during one of these drug-free periods that he awakes one morning to find himself covered in blood. Moving from his bedroom he finds his mother at the base of the stairs, with her throat cut. He starts to recall events the previous night, when he went out late and was confronted by his mother on his return. He also remembers being down at the local sea front, where a girl is found that morning with injuries similar to those suffered by his mother.

Yu-jin’s thought processes are followed throughout the day and the day following, as he reconstructs both recent events and those going back a few years, encompassing the seeming accidental deaths of his father and brother Yu-min. He finds his mother’s diary, which helps to stimulate both his recollections and his resentments. Yu-jin is sensitive to any slights, real or imagined, to his own feelings but strangely indifferent to the emotions of others, even those of his own family.

From the first few pages it is evident that Yu-jin is a very strange young man, and it comes as no surprise to find out that his medication was not anti-seizure medicine at all, but prescribed for an entirely different ailment.

This is not the first book to attempt a depiction of psychopathy from the inside, as it were, and one can only admire the way in which the author gradually exposes the nature of the subject, and events of the past, to reveal a complete picture of the person under study. It is not, however, a comfortable read, and the protagonist’s behaviour so contrary to one’s natural instincts.

It may be that some readers will find other aspects interesting. If you relish speculating on good and evil I suppose there is plenty of scope for rumination. Certainly there is anticipation of terrible deeds still to be revealed, or to follow. Personally, I just wanted it to be over with, and as soon as possible.