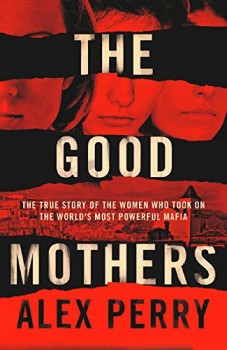 The story of three women born into the claustrophobic world of the Calabrian mafia and the battle of Alessandra Cerretti, the Sicilian-born prosecutor who has devoted her life to bringing down the ‘Ndrangheta, the world’s most powerful crime syndicate.

Based on original source material and access to Italian prosecutors’ records, investigative writer Alex Perry tells the amazing, compelling and tragic story of how a small group of women, born into the claustrophobic world of the Calabrian mafia, fought and died to ensure their children would not suffer a similar fate.

The ‘Ndrangheta – a name, if not a entity, known to most readers of crime fiction – is the most powerful criminal organisation in the world. It was founded more than a century ago as a loose co-operative of 140 clans from the villages and plains of the scorched and poverty stricken province in Italy’s far south, and it survived the purges of the Sicilian mafia and Napoli’s Camorra to effectively become a state within a state.

Although badly damaged by the bravery of these women – and the incredible persistence of the Sicilian-born prosecutor Alessandra Cerretti who has devoted her life to destroying it – the ‘Ndrangheta still runs close to three-quarters of all cocaine and heroin brought into Europe, brokers global arms deals, plunders the Italian state and the European Union, and has worlwide ‘franchises’ extending across more than 50 countries, with its market-moving power in global finance services and money laundering on offer, and used by almost every major criminal operation from the Russian mafias to Japan’s Yakusa.

Its income is counted in billions of euros a year and its influence such that at least one African country uses its army to clear the runways when drugs flights arrive from the Columbian cartels. It uses its own language and its power rests on a code of silence, or ‘omertà’, enforced by a claustrophobic family hierarchy and murderous misogyny.

Men and boys rule. At the age of 13 or 14 girls are forced into arranged clan marriages. Their every move is controlled and beatings are routine. A woman who is ‘unfaithful’ – even to a dead husband – can expect her sons, brothers or father to kill her to wipe out the ‘family dishonour’. Their names will never be mentioned again.

This is the gripping and moving story of three women who stood up to their own and the wider ’Ndrangheta ‘family’, at terrible personal cost, in the hope that their children could live better lives, is more powerful than any fiction.

When Lea Garofalo ‘disappeared’ after giving evidence against her mafiosi husband, prosecutor Cerreti realised the ’Ndrangheta’s bigotry may be its great flaw. The key to bringing down this criminal empire was to allow its women to speak out. When she finds two collaborators inside the organisation, she must persuade them to cooperate, and save themselves and their children. These women know they are fighting for their own lives as well as their children. All, at some time, expect they will pay the price of testifying.

Perry describes the painful and dangerous process of their rebellion with a gripping and heart-breaking empathy. He also brings to vivid life Cerreti’s struggles with bureaucracy and corruption as she effectively sacrifices any hope of a normal existence to fulfil her quest.

If you want to understand the real world of international organised crime which forms the background to so many stories, this is an absolute must read. For a tale of determination, heroism and the power of a mother’s love for her children you will not find anything better.