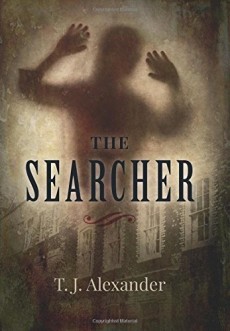 A child is found dead on wasteland in the London Liberty of Norton Folgate. ‘Searcher’ Adah Flint must examine the little girl’s body to discover her identity and how she died.

British-born Australian history professor TJ Alexander returns to her homeland and family history to retrace and re-imagine part of the life of her widowed three-times great grandmother Adah Flint, the searcher of the London Liberty of Norton Folgate. The result, a mixture of truth and invention, is a detective mystery of compassion, rare insight and social comment.

In January 1822 a child is found dead on wasteland in the Liberty – a survival of a local government unit from the Middle Ages in which royal rights had been devolved into private hands. Norton Folgate was a liberty in the metropolitan area of the Bishopsgate ward of the City to the south, the parish of St Leonard, Shoreditch to the north and the parish of Spitalfields, one of the capital’s most deprived and crime-ridden areas, to the east.

Adah Flint, the Liberty’s Searcher, a woman who determines causes of death for the parishes and another ancient title deriving from Elizabethan times, must examine the little girl’s body to discover her identity and find the cause of death. Despite lack of medical training, parishes expanded the searchers’ responsibilities during the 18th century with female relatives of parish workers rather than midwives and nurses often filling the positions.

This is how Adah came to her influential role, appointed after the sudden death of her husband William, the Liberty’s beadle, another ancient post whose duties were centred on the parish watch-house from which he and his watchmen deal with nocturnal criminality in an area of rapidly increasing population, crowded conditions with poor sanitation and much urban poverty and squalor. A beadle might give evidence at the Old Bailey two or three times a year in more serious cases and his investigations, pursuits and arrests, often based on personal knowledge of the offenders, frequently led to penal transportation.

But at the same time, Adah must also deal with the trustees of Norton Folgate, determined to evict her and her growing family from the watch-house to make room for a new appointee to her dead husband’s role.

Adah’s search for dead girl’s identity involves her with one of the most famous criminal cases of the day, the conviction of a woman known as Sarah Stone for the recently criminalised act of child-stealing. Stone was sentenced to transportation after a trial marked by its total incompetence and reliance on rumour, innuendo and omission, but instead was sent to the recently established ‘modern’ penitentiary on the marshy banks of the Thames at Millbank where she eventually died.

Adah’s investigation takes her through the cosmopolitan backstreets of early 19th century London, with its inns and prisons, street markets and prostitution, cruelty and drugs. At the same time it highlights the plight of women, treated as brood mares, housekeepers or whores by the sanctimonious and hypocritical Victorian male population. The Searcher, which is based on real characters and a true crime, takes the reader into the long-forgotten existence of the women who once played an important role in the solving of crime and the world in which they worked.

Eventually Alexander joins the story herself, dragging her story into the 21st century. Some mysteries are solved, but new ones unfold. She wonders whether Adah would approve of her portrayal, but most readers will by then be convinced she would.

This is an important as well as an entertaining story and should be a must-read for those bored with traditional Victorian fiction, those concerned with the unfolding historical role of women and those who just love a great story based on truth and told with utter believability and real compassion.