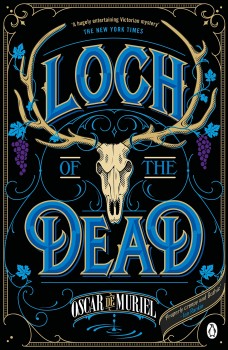 Loch of the Dead

Paranormal investigators Inspectors Frey and McGray, lured to a lonely Highland manor by a promise of a cure for the mad sister of ‘Nine-Nails’ and a threat to the estate’s young heir, enter a Gothic world of blood, bats, folklore, superstition and murder.

Oscar de Muriel’s four Frey and McGray stories all have a curious mystery at their heart and his latest – and by far the best – is no different. No matter how strange, stunning or creepy the setting and narrative, the main reason for their success is the quality of his writing, his use of often robust humour and their basis in truth.

The Mexican-born, Manchester-based chemist, translator and violinist has based each story in an area in which he has particular expertise and it’s always worth reading his author’s notes, both to inform and at least partly explain the basis of the story.

After an absence of more than two years, the two paranormal investigators of the Commission for the Elucidation of Unsolved Cases Presumably Related to the Odd and Ghostly are back in literary action.

The relationship between the two, in the past often spikey, is beginning to warm, as ‘Nine-Nails’ McGray, that bastion of rough, tough Scottish policing, comes to appreciate the strengths of his colleague Frey, the college-educated London gentleman with his love of logic and correct procedure.

Even without the tartan and the accents, there’s still plenty of room for some fairly basic humour between them and their differences are highlighted by the introduction of Frey’s Uncle Maurice, a quintessentially English wealthy Victorian bachelor, who plays a key role.
When Frey is visited at the commission’s Edinburgh headquarters by Millie Fletcher, housekeeper to the wealthy Kolomon family, lairds of a lonely Highlands estate, he realises that she offers a mystery McGray will not be able to turn down.

Benjamin, the illegitimate child she was forced to give away, is being brought back into the Kolomon family as heir to his father’s estate. But the boy has received death threats and in return for the inspectors’ help, Millie says she can reveal a remedy to cure McGray’s beloved sister of the madness that led to the loss of both his family and his finger.

But danger finds Benjamin first in Orkney, where his guardian is murdered, then follows him to the Kolomon manor on the sinister and threatening Loch Maree. And the ill-matched and at times, rather odd, McGray and Frey, together with Uncle Maurice, soon discover they have walked into a living nightmare.

Amid the beautiful, yet menacing, islands and woods of the loch and the strangely darkened Kolomon manor with its uncommunicative long-term staff and even stranger neighbours, all of whom seem to have secrets of their own, they face a range of threats and crimes ranging from the melodramatic to the supernatural.

The superbly depicted Scottish setting, the pacing of events and the steady creeping up of the levels of horror make this a compelling, page-turning read. De Muriel never overdoes the supernatural and frequently offers possible explanations, but in a late 19th century world where news travels only at the pace of a horse, or at best a telegram from more civilised areas, everything and anything seems not only believable, but also quite likely.

As usual, the characterisation, even of the minor players, is perfect, and De Muriel maintains the mood of danger and eeriness through to an explosive conclusion. If you want blood, bats, folklore, superstition and more than a touch of the Gothic mixed in with murder this is certainly a book for you!