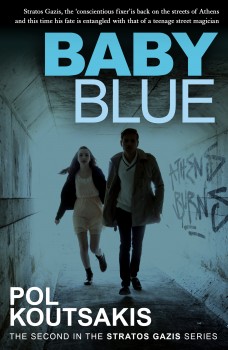 Stratos Gazis’ friend Angelino has taken charge of Emma, a talented blind girl, who is bitter at the murder of the man who protected her. Stratos gets the job of finding the killer.

Stratos Gazis was introduced in Athenian Blues, a native of Athens who kills for money but only when his targets deserve it – a ‘conscientious fixer’ as he likes to call himself. Stratos and three old friends form a tight group based on past experience: Drag the cop, Teri the transsexual and Maria, with whom both Stratos and Drag are in love.

As the book starts Stratos is visiting Angelino, a man with a reliable fund of information about what is happening in town. Angelino when last seen was living on the street, but has persuaded investors to put up enough to rent swanky premises on the premise that Emma, a brilliant young card manipulator, has a golden future. Emma was being protected on the street by Themis until three years ago when he was shot and killed, and Angelino asks Stratos to find out why.

Stratos is still talking to Emma when three men arrive, armed and taking no prisoners. Stratos is able to protect Emma but Angelino is badly hurt. Having parked Emma with Teri for safety, Stratos starts asking questions on the street about Themis. Themis was known as a dedicated journalist and his abandonment of his profession seems odd: it is rumoured that he had been exposed as a paedophile, but Stratos keeps digging and eventually a new story emerges.

Stratos’ investigations among the lower strata of Athenian society give an opportunity for the author to explore just how bad things have got in the Greek capital since the financial meltdown. This is a novel, but the sense of societal collapse and utter helplessness of the poor is as convincing as it is horrifying. Koutsakis advances no easy solutions, but identifies corruption and indifference everywhere.

As he works his way across town, Stratos identifies himself as a private detective, and essentially performs the functions of one, although he does occasionally kill, just to keep his hand in perhaps. He doesn’t really come across as a killer, despite his rather cold personality, but has all the skills.

The professional killer is regularly seen in crime literature and can be an interesting reflection of how the author views the world. I was recently reading Marathon Man, and was struck as to how killers worldwide were familiar with each other and appreciative of good work, somewhat like a professional club. The killer in The Day of the Jackal is the archetypal loner. Stratos comes across as a man with deep suspicions about the human race, and he rarely finds reason for optimism.

In fact, Stratos finds out at the beginning of the book that Maria is pregnant, and by him. The pair are in love but know that his profession is no basis for a happy family life. Maria comes up with a solution as shocking as it is desperate.