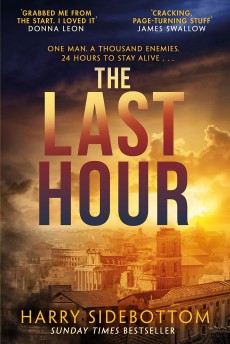 Marcus Clodius Ballista, the Romanised Angle princeling, uncovers a plot to assassinate the Emperor Gallenius, but has just 24 hours to warn his friend.

The decline and fall of the Roman Empire has provided many authors with a rich ground for fiction, but few have exploited it as well as Harry Sidebottom, son of a racehorse trainer, Doctor of Ancient History at Oxford and progenitor of the adventures of Marcus Clodius Ballista, the protagonist of his Warrior of Rome series.

In this seventh story, set in the middle of the third century, Ballista, originally a boy diplomatic hostage from the barbarian Angles and now in his thirties, has risen to become an equestrian and a distinguished soldier in the service of the Emperor Valerian and his son Gallienus.

When Valarian was captured by the Sassanid Persians, under Shapur I, Gallienus assumed the purple, but his 15-year reign was marked by the secession of Gaul and Palmyra and his inability to win them back. Despite innovations such as the commissioning of quick reaction cavalry units, the Comitatenses, that could be dispatched anywhere at short order, he alienated the Senate by forbidding them from military commands, undermining senatorial power as more reliable equestrian officers rose to prominence.

Plots and revolts against him were sprinkled throughout his 15-year reign, while Rome itself became steadily more corrupt and violent, with factions or criminal gangs de facto rulers of its poorer areas.

Against this background Ballista, who grew up with the Emperor, is summonsed to help crush an assassination attempt against Gallienus who is to be killed as he leaves the Colesseum after gladiatoral games.

Details are thin, but Ballista discovers that members of the Emperor’s administration are involved – that he and his family are also to be executed as supporters of Gallienus and that his inquiry has been carefully set up.

A bloody battle against a gang of assassins in the stairwells of the Mausoleum of Hadrian sees him improbably escape by diving more than 100 feet into the Tiber in full flood and survive. Alone, unarmed, without money or friends, with the City Watch ordered to take him alive, while others want him dead, he realises he has only 24 hours to expose the conspirators. If the Emperor dies, violence and civil war will follow. His friends and their families also face death. Somehow he must cross Rome to warn Gallienus.

From thereon, it is a mad pursuit as Ballista steals, fights, cons and bribes his way through a hostile city. It’s Rambo in Rome, with a pace and plot readers of Bernard Cornwell, Ben Kane, Simon Scarrow or Conn Iggulden will appreciate!

But as with all Sidebottom’s books this tale of bloodlust, ruthless ambition and revenge offers an extraordinarily vivid take on the ancient world. While it swashes its bloody buckle to the full it is somehow curiously plausible and the author’s gift for summoning up a sense of place and the life of the Empire at street level with its multitude of religions, factions, slaves, criminals, bars, baths and brothels actually makes you feel as though you are there.

It’s another winner for Sidebottom, with Ballista firmly in the Emperor’s favour. But I have a feeling we shall be seeing the big, blond Angle again soon – and if it’s as good an action adventure as this one, that can’t come quickly enough!