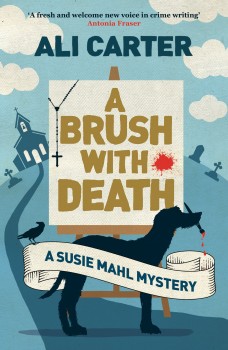 A Brush with Death

Artist Susie Mahl is a guest at the country seat of the Earl of Greengrass when her host is murdered in the parish churchyard. With the local police baffled, she applies her eye for detail and her natural inquisitiveness to uncover the killer.

Ali Carter is a new name in the genre. Her style is a modern update of Agatha Christie, her observation sharp, her humour gentle and her characters and their settings all too believable.

Her debut as a novelist is decidedly cosy, perhaps best described as Miss Marple visits Downton Abbey – although it stretches the imagination to picture Christie’s elderly and very correct pillar of the established church Jane Marple boosting her confidence with a passion for racy silk underwear from the stylish and expensive boutiques of St Germain de Pres and the Rue St Honore!

Carter’s heroine, painter, pet portraitist and amateur sleuth, Susie Mahl, is everything she should be: witty, warm, charming, funny and endlessly inquisitive. Carter has a degree in art history from St Andrews – the same course and alma mater as that other nice middle-class girl Kate, Duchess of Cambridge – and she entered investment management, retail and technology until a cycle accident and major brain surgery cut her career short.

As part of a lengthy recovery, she walked the traditional three-month pilgrim route from Canterbury to Rome alone and wrote about it in her moving book, An Accidental Jubilee. She decided to follow her first passion, and became an artist, specialising in oil paintings from life – and accepting commissions for pet portraits – just as her 30-something detective does.

There’s not much of a plot to this debut. Experienced readers will spot the killer long before the eventual expose. But that’s not really the point. This is a story for mystery fans sick of bloody murder and sexual violence.

You can happily lose yourself in Carter’s shrewdly observed world of animals and monied country gentry as Susie, commissioned on recommendation to paint a giant deerhound, is dragged into investigating the death of a friend and former client, landowner Alexander, the ninth Earl of Greengrass.

The elderly earl has been found dead, caught literally with his trousers down in the graveyard of the parish church after his prostate problems have forced him to quit during a service. Police investigations reveal he has been murdered and his whole family and staff come under suspicion.

With her artist’s eye for detail Susie realises that all may not be as innocent as it looks and her natural inquisitiveness – allied to friendship and the attraction of a handsome police doctor – leads her to investigate.

A combination of logic, luck and one or two rather underhand stunts which could set her at odds with the police put Susie on the right track and expose the link between a past never spoken about in polite circles and a killer seeking revenge.

This is a nice piece of social commentary – absorbing, charming and funny. Carter is a fresh and welcome new voice in crime writing and Susie Mahl a very different  detective.