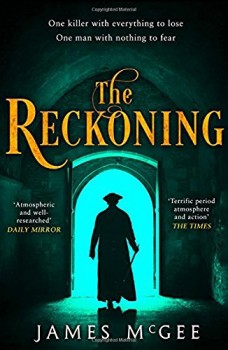 Bow Street Runner Matthew Hawkwood’s investigation of a prostitute’s death leads him into a world of espionage – and danger.

Every time I read the adventures of Captain Matthew Hawkwood, former army officer and Bow Street Runner, I am reminded of his somewhat younger – and far better known – army colleague Richard Sharpe.

They have a lot in common. Both were commissioned from the ranks in the 95th of Foot, later to become the Rifle Brigade, for outstanding courage and ability. Both were Exploring Officers, that combination of intelligence gatherer, guerilla fighter, agent provocateur and secret agent, who together with their small bands of ‘chosen men’, did so much to weaken the French and Spanish defenders and to lay the groundwork for the Duke of Wellington’s almost unbroken successes in the Peninsular campaigns.

Both ignored tradition and social barriers to form lifelong bonds with natural leaders among their men. Sharpe had his Rifleman, later Sergeant Major, Patrick Harper. Hawkwood has his former Sergeant, Nathaniel Jago. Both have personalities their superiors describe as recalcitrant. Neither suffers fools whatever their rank or position, both have a natural sense of justice, and both are prepared to operate far outside accepted rules should the situation demand it.

Enough comparisons! By 1813, while Sharpe is still fighting in Spain, Hawkwood has taken his injuries into civilian life and become a Principal Officer in the Runners, Britain’s first organised police force, under the principled and humane Chief Magistrate James Read.
When he is called to investigate the discovery of a beautiful young woman’s naked and abused body in an open grave, he is dragged into a world of aristocratic vice and corruption.

When Read receives a direct order from the Home Secretary to abandon the case, Hawkwood realises that his hunt has taken him from London’s backstreets to the heart of a government determined to protect its secrets at any cost. As the truth gradually emerges, he must balance his loyalty against his desire for justice.

This sixth adventure is, like all its predecessors, immaculately researched and offers a spectacular picture of Regency London with all its vices, including the emergence among the aristocracy of what was to become known abroad as the ‘English disease’. The historical setting and characters are totally accurate. Britain, in its own interests, backed to the hilt the various secret societies set up to overthrow Napoleon and restore the Bourbons to the French throne.

Switching as it does at breakneck pace between aristocratic salons, government offices, the criminal underworld – where Nat Jago is now a major player – with clever characterisation and twisted plotting, the tale balances poignant moments with dark and massively violent action, historical interest, powerful suspense and flashes of wry army-inspired wit.

Intellectual snobs may sneer at this as Bond meets Brummel, but McGee, who comes from a military background, can swash a buckle with the best and has once again delivered all the necessary components and delights of a classic adventure story, with the addition of a background of social and political comment. My only regret is that we are unlikely to ever see a co-operation which features both Hawkwood and Bernard Cornwell’s Sharpe in the same story!